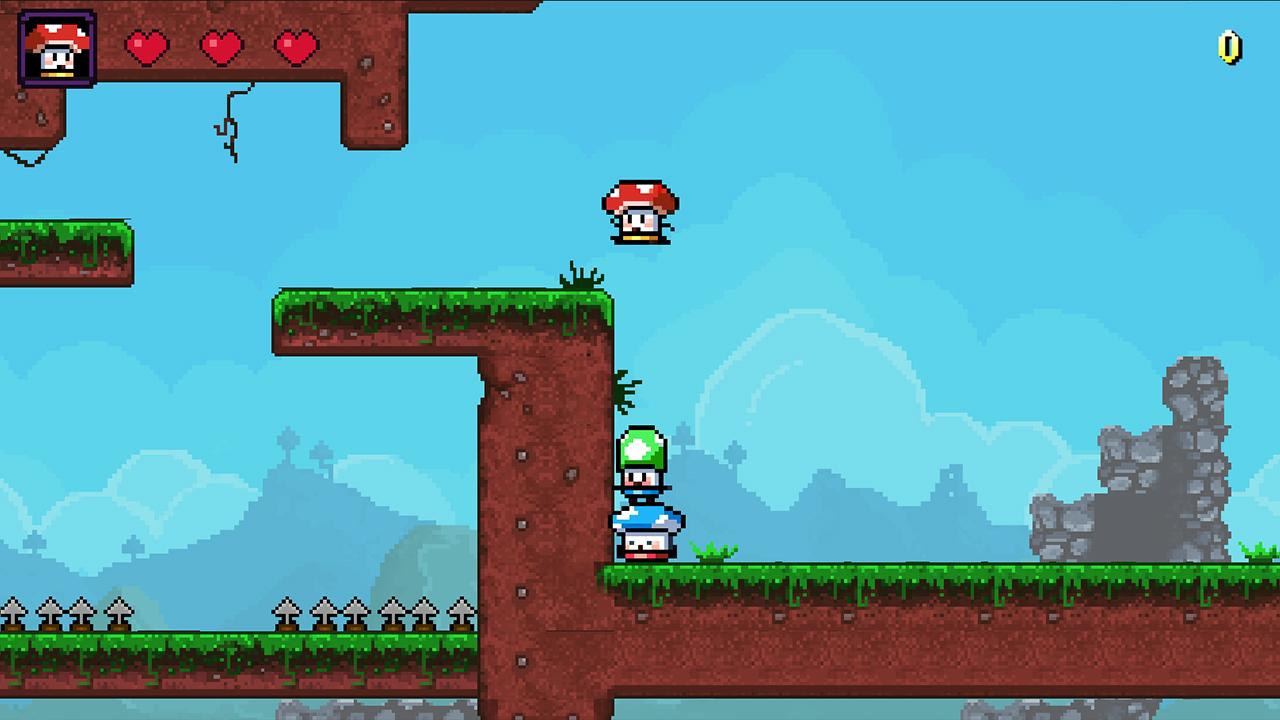 A trio of Fungi are off to defeat a poisonous mageshroom in Mushroom Heroes, a pixel-art puzzle platformer that’s completely broken on PS4 right now. The Finger Guns review.

It’s always a shame when a promising indie game is struck down by technical issues. That’s certainly the case with Mushroom Heroes, a game that has been available on PC and mobiles for a few years, totally problem free. The journey from PC to PS4 has not been kind on this puzzle platformer however, leaving it with more than a few technical hiccups and 1 big game breaking bug.

Mushroom Heroes is a 2D pixel-art puzzle platformer about a trio of mushroom adventurers. The mushroom kingdom lived in peace until the King’s most trusted Mage Gaddar, who happened to be the only poisonous fungi around, started to experiment. Upset that he was the only poisonous mushroom around, Gaddar used his powers to make other mushrooms venomous too. The King didn’t take kindly to this and banished the Mage – but he acted too quickly as Gaddar is the only mushroom who had the antidote to the poison he’d inflicted upon his victims. Recruiting the help of 3 heroic ‘shrooms, the King asks the team to find Gaddar and retrieve the antidote.

Of Mushroom Heroes’ 38 levels, I’ve been able to play 15 of them. This is because of a game breaking glitch with the menu system. The game levels are split into 3 groups, each with their own visual presentation. The first is a dungeon and the second is a lush outdoor area. The last, which I’m unable to reach, seems to be a desert temple or something like that. Each of these game worlds are presented on a separate part of the game menu – only it’s currently impossible to move onto the menu for the second or third area. It’s only possible to select the first 13 levels because the button press of R1 to move onto the second world doesn’t work. If you want to play the rest of the game, you have to do it in one sitting without closing the game, returning to the menu and hope that it doesn’t crash (I’ve had 3 blue screen crashes while playing Mushroom Heroes).

The aim of each level in Mushroom Heroes, at least for the 15 I’ve been able to play, is to reach the exit door with one of the 3 fungi warriors. In each level, the trio spawn together and they’ll have to overcome spikes, slime monsters, switches, pressure plates, destructible walls and various other dangers or obstacles in order to reach those doors.

None of the Mushroom Heroes can achieve this goal alone. Each of them has a set of skills that the player needs to first understand then utilise and combine as you switch control of the team. Dombi the Blue Mushroom has a shield which blocks projectiles and he can drag around boxes. He just can’t jump very far. Jumpi the red mushroom can jump large distances, stick to any wall with a green covering and can use his cap as a parachute to descend slowly through the air. Finally there’s Yuppie, a mushroom who’s jump can barely be described as such but who is equipped with a bow and arrow. This weapon can kill bats, monsters, walls and can even be upgraded to a fire arrow that’ll trigger explosives.

The whole game is designed around using the abilities of the Mushroom Heroes in conjunction with one another in order to reach the exit gate. In one level you’ve got to use Dombi’s shield to stop the fire balls flying out of a turret to protect Yuppie who acts like a platform (you can stack the 3 mushrooms so they can reach higher spots) for Jumpi so that he can reach the exit. In other levels, you’ve got to stack Dombi and Jumpi so that Yuppie can shoot arrows into switches that are otherwise unreachable. In the 15 levels I’ve been able to experience, it becomes obvious what you have to do with a little trial and error. Doing so in the right order can be a little tricky thought.

The controls for the game, especially when using Dombi, and the way the Mushroom Heroes move through the world can be a little unpolished. Moving boxes with Dombi isn’t linked to a button press. Instead, you simply walk into it and he grabs at it. Stop moving and he lets go. This gets very fiddly if you’re trying to pull a box; you have to walk into it and then walk away from it quickly so that Dombi will pull it. I’ve accidentally walked straight into a spike pit because I’d mistimed a push/pull maneuver that simply should have been linked to a button press.

Your performance in each level of this game is graded – from 1 to 3 mushrooms – based on how many enemies you kill and how many coins you’ve collected from pots and chests Yuppie breaks open with his bow and arrow. To get all 3 Mushrooms in a level, you’ll really have to go out of your way. Some of the coins are in places that are very time consuming for Yuppie to reach and will triple the time you’re spending in a level if you’re going for that 100%.

The technical issues with Mushroom Heroes might make you think twice about attempting to collect all it has hidden away though. The frame rate can dip sharply when there are lots of things moving on screen. On some levels, it’s possible to see the white space between the blocks of background textures as you move through along platforms which can be quite irritating. There’s a glitch where you can accidentally control the movement of 2 characters at the same time. Several times I’ve been moving Dombi only to see a game over screen because Yuppie walked himself into a spike pit. Some of the larger background images simply don’t fit the screen size. As you jump, it’s possible to see a black line where the image ends. This is incredibly distracting. Lastly, there are the aforementioned blue screen crashes. When you’ve got to complete the game in one sitting, these are hella frustrating. I quit on the third occasion.

I imagine many of Mushroom Heroes’ issues can be patched away and fixed. I truly hope the game is given that chance because from what I’ve played, there’s some interesting game design on display. Sure, there’s some personal bugbears in there – unskippable dialogue that’s displayed each and every time you start a level and some puzzles that can become unsolvable close to their end point – but the main issues with this game are technical rather than conceptual. Only being able to play under half of the game without replaying a bunch of previous levels first or finishing the game in a single sitting being the most heinous. In its current form, it’s impossible to recommend Mushroom Heroes to anyone who doesn’t have a solid 6 hour+ block of time to spend on this game without interruption. This is sadly a shiitake port of a promising game.

Mushroom Heroes is available now on PS4 (reviewed on a standard PS4 using the 1.01 version of the game), PSVita, PC, Nintendo Switch and mobile devices.