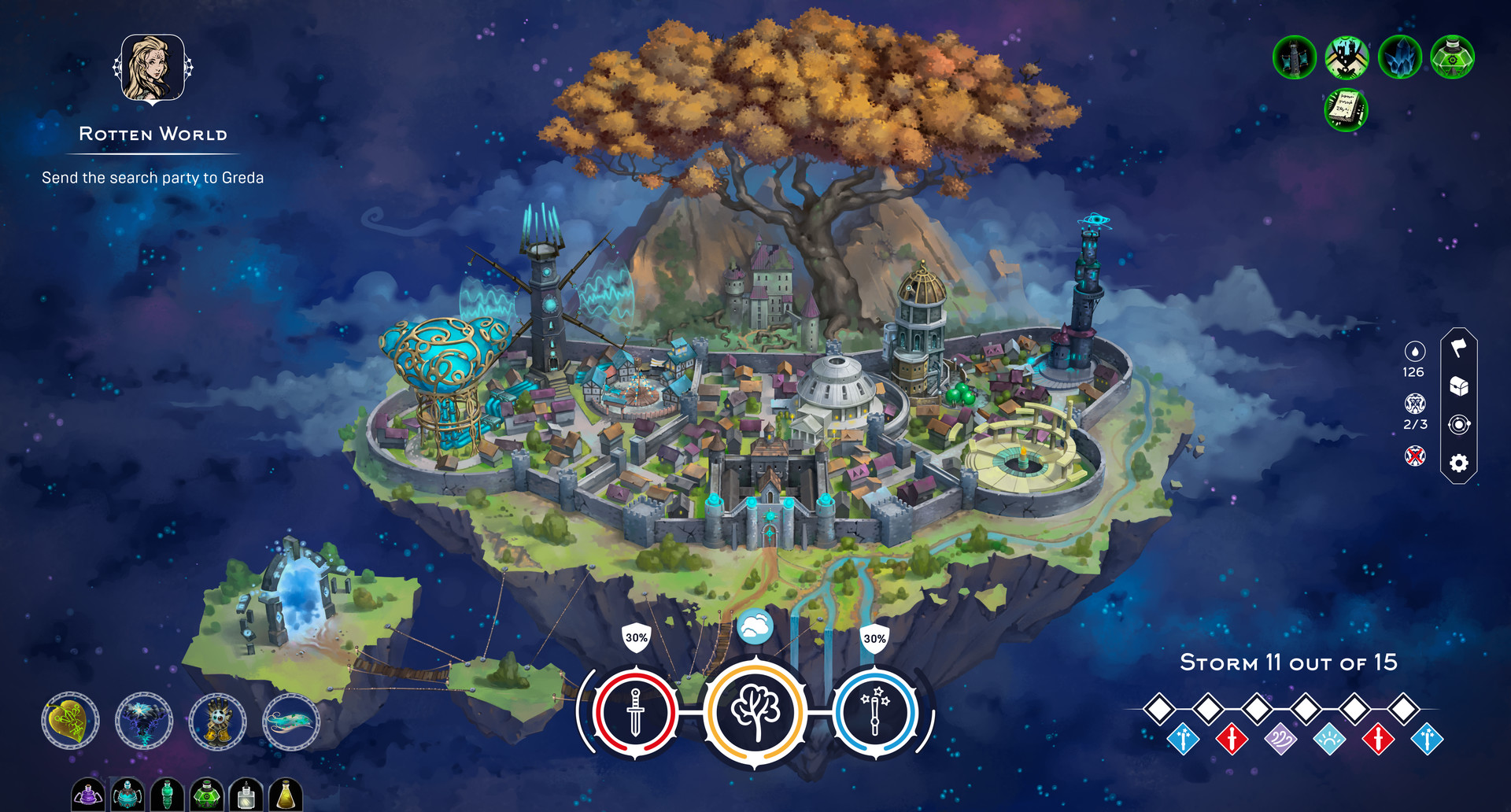 A resource management game that lacks depth and intuitive controls, Mittleborg: City of Mages is a tedious affair on the Switch. The Finger Guns Review.

Almost the entirety of Mittleborg: City of Mages takes place on a single screen. From this painterly image of the floating island of Mittleborg you’ll direct your forces to defend the walls of the city from forces that appear in waves. While that single image is pleasant enough at first, you’ll be pig sick of it before you’ve come close to completing this “strategic adventure with elements of rogue-like and resource management”.

Mittleborg: City of Mages begins as the player fills the empty throne and becomes Chancellor in Mittelborg. This island city is trapped between dimensions and since the prior chancellor went missing, the Tree of Order which keeps balance in the universe and provides the city with aether has been dying. With the player now in charge, they’re tasked with overcoming 15 “tespests”, repelling attacks from unseen enemies that are trying to destroy the Tree of Order and upsetting balance. The players choices and resource management will be the difference between Mittleborg falling or the city having a future.

While that sounds grandiose, it’s actually quite simplistic. At the start of each run at Mittleborg: City of Mages you start with 2 mages, a fully outfitted city defence and enough Aether (the currency in the game) to buy or upgrade a few things. The city has 2 defensive gauges – The Garrison which will combat physical attacks and the Tower of Light which will clash with Magical attacks – and a large meter which displays the health points of the Tree of Order.

Each tempest contains between 2 and 5 random waves and each wave can come in 1 of 4 varieties. There’s 2 types of attack – magical or physical – a lull and a breeze, both of which offer an opportunity for the player to secure more resources. Magical attacks (blue tempest waves) will decrease the health points of the Tower of Life and physical attacks (red tempest waves) will decrease the health of the Garrison. Once these defences are out of health points, attacks will land directly on the Tree of Order. If the Tree of Order HP hits zero, you’re sent back to the beginning of your reign over Mittleborg to try again.

In order to prevent your Tree from getting cut down, you’ll need to manage your resources and put up the correct defences during each wave of a Tempest. This is where the Mages come in. These magical folk will do different things depending on where you place them on the island and during each type of tempest wave. Place a Mage in the Garrison during a physical attack and they’ll reflect 25% of the damage done by the wave. The same happens when you place a Mage in the Tower of Life during a magical attack wave. During a “Lull”, if a Mage is placed on the portal on the map, they’ll be able to travel out from Mittleborg and retrieve items from other dimensions. If a Mage is placed in the windmill looking wind catcher during a breeze wave, they’ll catch a decent amount of Aether during that turn which will be added to your total.

The kicker? Each wave of a tempest is represented as a question mark until you trigger them so you’re not entirely sure what to plan for. This is where the strategy and resource management comes in. There are buildings in Mittleborg: City of Mages that can be upgraded with Aether to help you foresee what’s coming or help mitigate things you can’t. Upgrade The Oracle building and more and more of those question mark Tempest waves will be transformed into the icon for the activity they’ll actually become. Upgrade the portal and more than 1 Mage can head out exploring for items during a “lull”. These items can then be used when needed, like potions that heal the Tree of Order or buffs for defence for a single turn for example. Aether can also be spent to heal both the Garrison and Tower of Life. Healing is limited and turn based (i.e. healing only takes place during a Tempest wave) but ensuring you’ve got enough health points to deal with an attack is essential to success.

During every other Tempest, you’ll also have random events to deal with. These occur between waves and pitch a problem at you and present you with 4 options you can choose to deal with it. Gargoyles are attacking, a mysterious race of creepy beings are spending an abnormal amount of gold in the Mittleborg markets, the alchemist has discovered a dragon egg and many other issues are described to the player. Your choices with how to manage them may have positive or negative effects on the kingdom with passive blessings and curses among those things you can invite upon yourself. It’s very obvious that English isn’t the primary language from the Mittleborg: City of Mages developers as these events are packed with typo’s, words that just don’t fit the situation and sentences that make little sense at first glance.

Once you’ve got used to the systems employed in Mittleborg: City of Mages through trial and error, all the mystique falls away from the mechanics and the game becomes incredibly rudimentary. It’s simply moving your Mages to where they’ll be most effective during each wave and making the most of what items and aether you can gather or craft. The challenge of Mittleborg: City of Mages is less to do with knowledge or skill and much more to do with having patience because success is tied to something you can’t influence – luck.

It doesn’t really matter how much planning and preparing you do during any run at Mittleborg: City of Mages. You’ll always be at the mercy of the random wave generator and those random events. Your knowledge of what works and doesn’t work during each run is the only thing you carry forward as well as “skills” which, I’ll be honest, even after 7 tedious hours with this game I still have very little understanding off. They seem to be awarded at random and don’t appear to do much at all going forward. Success doesn’t ever feel earned in Mittleborg: City of Mages because of the random way in which it throws adversity at you. Employing the exact same strategy can take you 5 or 13 Tempests through the game.

There is a narrative to be found in Mittleborg: City of Mages but it’s buried deep beneath the surface of the games systems. The previous Chancellor has left his musings on scrolls which are spread out across time and space and as you collect them, they’ll unveil why he left the throne and what’s causing the chaos that threatens Mittleborg. Because it’s delivered purely by text and piecemeal as the game is played, the narrative really struggles to find its footing and becomes more of a side attraction you’d have to seek out rather than an important part of the game. Even when you do seek it out, it doesn’t much to say of any interest.

The transition from PC (where the game has been available for more than a year) to Nintendo Switch has been incredibly tough on Mittleborg: City of Mages. In the PC version, you can move the mouse cursor and select whatever you want to on the main screen. That’s not the case for the Switch. Elements of the screen have been grouped and separated. Locations on the island, controls over the tempest, the inventory, passive effects and other portions of the screen have been sectioned off by an invisible barrier. In order to move through these sections, you have to use the right stick. Once you’ve switched area, you then navigate through the items within this area with the left stick. This is a very clunky and counter-intuitive system that I’ve felt I’ve been fighting against for the entire duration of my time with it. Despite being perfect for it, there is no implementation of the touch screen functionality at all. A missed opportunity.

What compounds this issue is how cluttered the screen can get at times. When multiple things occur on screen at any one time, the UI and menus that pop up can really clog up the screen and looks quite ugly.

Played almost entirely on one screen with clunky controls and game play which has you at the mercy of a random number generator, Mittleborg: City of Mages is quite a tedious game to play. It’ll kill a few hours of spare time as you get to grips with what the game is trying to achieve but the experience quickly degenerates into a mundane, repetitive resource management game that’ll have you reaching for something else.