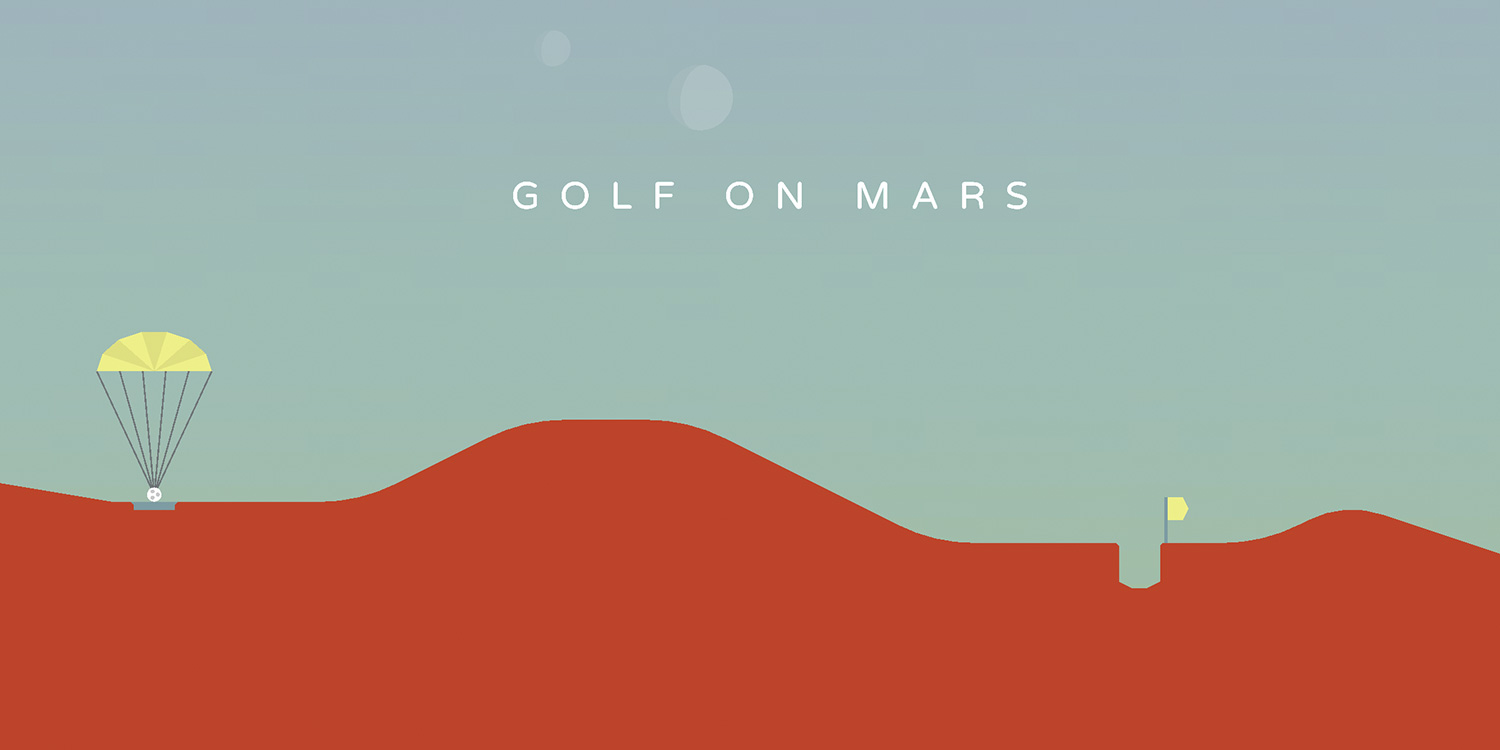 The sequel to Desert Golfing, Golf on Mars makes some interesting changes to the tried and tested formula which make it much more approachable. The Finger Guns Review.

I loved Desert Golfing. For the best part of a quarter, I spent every opportunity I could on the mobile game, knocking a 2D ball around 2D environments to put it in a 2D hole. Breaks at work, on the bus, in the bath, at a particularly boring wedding reception. The sound effects of thwip…tshk tshk tshk were ingrained in my brain. I was never brilliant at the game and didn’t get even remotely close to the end but it was almost therapeutic and mesmerising to play. It was a fantastic time killer. Of course I was there on day 1 for Golf on Mars, the follow up by developers Captain Games. A more approachable take on the same concept with new mechanics, Golf on Mars is here to fill your every waking moment once again.

There were 21,700 or so holes in Desert Golfing, procedural generated for each player. Golf on Mars takes that number and goes ‘Happy Gilmore trying to putt’ on it. There are 25,770,000,000 possible holes in this sequel. When you start the game, it lays these hole designs back to back and in a random order so that each players journey through this game will be entirely different. And never ending. It is not possible to see every hole in Golf on Mars during your lifetime unless you’re a very cautious Highlander.

The concept of Golf on Mars will feel immediately similar to those who’ve played Desert Golfing. By using the touch screen, you pull back from the direction in which you want to smack the ball with the distance from your initial touch indicating the amount of power power. Let go and away you swing. Navigate the ever-red landscape like a physics puzzler where gravity and friction act naturally and putt the ball in the hole and that space becomes the tee-off for the next hole. Rinse and repeat, quite literally, ad infinitum this time around.

Golf on Mars evolves the original game’s formula in ways that Desert Golfing fans might find surprising. In Desert Golfing, the tee off and hole were contained in the same screen. If you over shot and sent the ball off the screen, you’d lose that shot and you’d be returned to the starting position. That’s not the case in Golf on Mars. Overshoot and you’ll just roll on past the target with the screen moving with the ball. This means that those impossible holes from the previous games aren’t here this time around. Instead, you can overshoot in order to come back on yourself. Some holes even require you to go a long way right in order to come back to the right in a cave below the surface. While this certainly makes putting the ball easier, which in turns means you’re seeing more content quicker, there’s a trade off – if you really overshoot and the terrain is mainly downhill from where the hole is, you might end up rolling a long, long way away from where you need to be. It’ll be personal preference on whether this is any more or less frustrating that spending hours stuck on the same hole. Personally, I found it much more appealing to backtrack than get stuck on a level like I did often in Desert Golfing.

It’s not just the structure of the game that has changed. There’s new mechanics too. In this game you can now put spin on the ball. After you’ve indicated your power, using a second finger on the touch screen moving up or down will add a clockwise or anti-clockwise spin on the ball. This is a very neat touch which can help the player navigate some of the more difficult holes.

Mars is a little more interesting than the desert too as there’s more than just the landmass to traverse. Weird, angled stones that offer a lot less friction than the sandy ground as well as strange alien cacti that stick to your golf ball exactly where they land on their surface are liberally sprinkled through the game. They’re joined by sand pits that slow down any momentum on the ball and bodies of water – not just the end of the game this time – that will slow down your ball but allow you to take a shot even while you’re sinking. While none of these totally revolutionise the formula from the first game, their inclusion certainly makes Golf on Mars more interesting – and sometimes a touch frustrating.

It’s the angled stones that can cause a little irritation. They sit on the surface of Mars and some of them are precariously placed so that they can fall over if you knock them over. In the 2200+ holes I’ve completed in the game till now, those stones have fallen over and covered the hole I’m trying to put my ball in twice, thus making the putt impossible. The stones have fallen on top of my ball once too, trapping me within its angles. Again, this made the hole impossible.

Thankfully, no hole in Golf on Mars is actually impossible. This game has a Skip function. If you take 25 or more shots on a hole, a button appears at the top of the screen and with a tap, you can skip to the next section of the game. This is a smart inclusion by Captain Games which manages to negate any of the oddities thrown up by the procedural generation of the game and how some of the new objects in game can react.

The thematic feel of Golf on Mars is the same as its predecessor only much more refined. It’s beautiful in it’s simplicity. An art style that’s all about bold colours and clean shapes, no music other than a little ditty that plays when you fall into a precipice that sends you back to your last tee-off station and the almost therapeutic sound effect of the golf ball being struck and the crunch of the ground as you land on it. I hate to use the world “addictive” but that’s exactly what this game is. Relaxing while simultaneously engaging, it’s a heady mix which hooks you in and just keeps you playing. 1 hole turns into 10 holes turns into a whole evening of just moving across Mars, hitting balls in holes. It’s just as charming as its predecessor but a touch more accessible.

Here’s the conundrum with Golf on Mars; It is undoubtedly easier than Desert Golfing which means you get the satisfaction of clearing holes far more regularly – but does that mean it loses something without the challenge? That feeling you got after clearing a hole in Desert Golfing that had you stumped for a while was incredibly gratifying. That feeling doesn’t come as often for Golf on Mars. Don’t get me wrong, the game is still incredibly satisfying to play but the release after finally sinking a tricky shot isn’t as rewarding when the game is more forgiving. Your mileage will vary then. For me, having fewer stumbling blocks and sticking points has meant that I’ve enjoyed the minimalist catharsis for longer stretches. Whether the game’s longevity will be that of it’s predecessor remains to be seen.

Golf on Mars is a natural evolution of the Desert Golfing formula introducing new mechanics and a more interesting landscape. There’s no adverts, no microtransactions and no distractions – just you, the never ending landscape of Mars, a simple but engrossing concept and a game play loop that won’t get boring for many, many hours. For some, the reduced challenge in this game will take a little away from the experience and some old frustrations have been replaced by new one’s but if you’re looking for something to kill time, there’s only a few games that can do it as expertly as Golf on Mars. Only 25,769,997,800‬ holes left to go…

Golf on Mars is available now on iOS (review version) and Android devices and is launching on PC on the 29th of June, 2020.