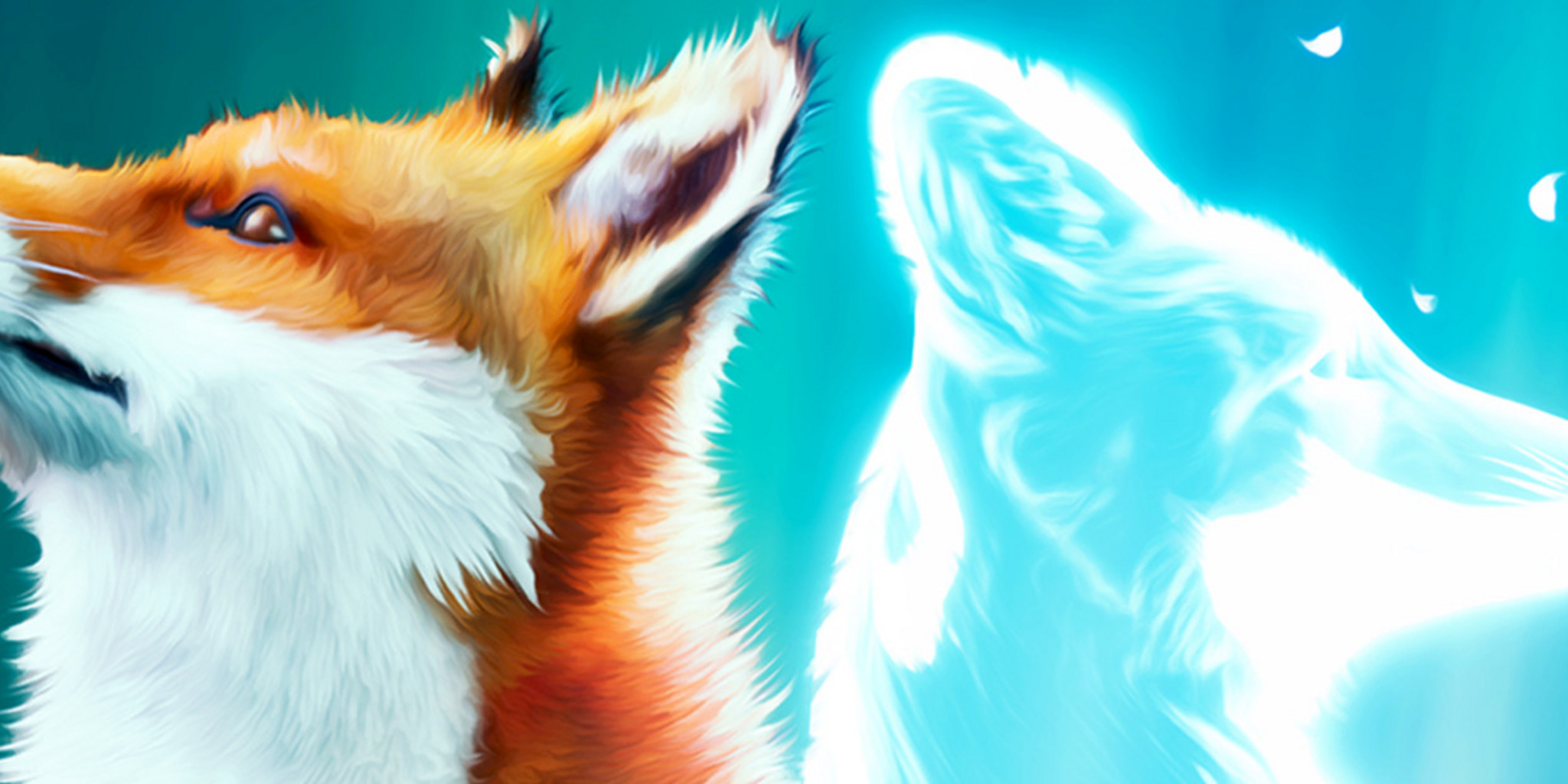 It was always going to get compared to Okami and Journey, but is Spirit of the North a spiritual successor to its forebears, or a transparent imitation? The Finger Guns Review;

With an evocative swirl of paint in the sky drawing you ever onward into this gorgeous little Icelandic adventure, Spirit of the North is an experience with only a few comparisons, but one in particular you may remember fondly is Journey.

You play as a nameless bushy red fox, platforming and mild puzzling their way through tumbling rocky landscapes inspired by Iceland. Hexagonal basalt pillars, majestic glacier ice, geothermal pools bursting water in the air, and snowy vistas that sweep out before you for miles. Spirit of the North is loosely based on the Finnish legend of ‘Tulikettu’. In this tale a fire fox brushes its tail over the snows of winter and embers of fire spark off and rise into the skies to form the Northern Lights. In Finnish the word for Northern Lights means fox fire. Sweet, right?

There’s no words, no dialogue, and no real directions or instructions beyond a few murals and totem stones. What would a fox have to say anyway? Instead the game deftly guides you with choice landmarks, pillars of stone that draw the eye, or the sweep of a valley down to the only logical place to keep going. It’s got some clever and subtle direction, where too often we are hand-held or even led by the nose through games. This lack of instruction fits perfectly within the aim of the game itself.

More than platforming or puzzles, it’s intended to be an experience. Spirit isn’t concerned with combat or health, tallies and scores and points, or almost any of the things we normally associate with most games. It’s far more concerned with letting you relax into a beautiful landscape, giving you gentle guidance to let you take things at your own pace, and leisurely moving through non-taxing puzzles to progress.

It’s quite stunning in places. Up close, foxy’s fur is like a Van Gogh painting. He doesn’t look like he’s made of polygons at all, but rather individually animated brushstrokes rustling in the breeze. The landscapes are often gorgeous and the sweep of foregrounds, backgrounds and far off peaks can be quite something to behold. It also benefits from a somewhat haunting soundtrack that adds a lot to a lonely world that’s remarkably scant on sounds.

You are there to explore. It really is just about being a spirit fox. There’s very little the designers have left in to take you out of the experience. Even saving is done simply by knocking wind chimes as you pass by. The most gamified parts might be the collectibles. During your journey, you need to find the bones of the old monks of the mountains to release them into the spirit realm. Reunite the monk’s cassock with their staff and they are free to go. There are 28 to find, and this collectible is a welcome distraction from the walking simulator that the rest of the game devolves into. You get a few new skins if you manage to find them all.

Unfortunately there are a number of issues that stop the game being quite as superb as it looks.

There’s lots of level verticality in the rolling hills and rocks, but foxy’s sphere of influence isn’t animated very closely to his body. This means that there will be a lot of times when you are standing with two back legs on a ledge and your two front legs off the edge. It often goes to the point of you being totally suspended in mid-air, or half buried in the rocks. I had to edge out into mid-air a number of times in order to drop to a ledge below. There is an annoying floatiness to the jumps and landings that make some of the more precision bits of platforming difficult.

It has only a couple of mechanics; you get maybe three power ups, spirit form, a bark that destroys the corruption, and a dash move. But each one is only really utilized a few times before being largely forgotten once the next one comes along. You eventually get to be the spirit fox, with a press of X allowing you to pass through obstacles and reach new areas. The dash command very strangely only dashes forward in respect to the camera’s position, not forward in relation to foxy. This threw me off a number of times; you really have to line everything up, camera, fox and jump.

It’s like if you had Okami, but took out everything that made it interesting to play; the fighting, health, precision platforming, townspeople, quests and objectives, the brushstroke painting, and the evocative legends, and instead replaced them with an existential spiritual journey. There is a legend behind this too, but it’s only barely necessary to how the game plays, and will only make sense right at the end.

And let’s talk about corruption on the land. You will come across red areas with some bones, choking vines, distended polyps that feed off the trees. It’s up to you to find the heart of them and bark to dissolve the corruption. Its quite arbitrary which bit of corruption you can actually affect, and you often pass ten before find the one you can bark at.

I’m just kind of sick of corruption cleansing as a game mechanic, it’s getting very tired. Let’s be fair, Okami, the game that SOTM wishes it was, is one of the fathers of the corruption cleansing gameplay loop. Sometimes it’s done well, like in Horizon Zero Dawn making stronger enemies, or the intrinsically linked to the plot of the Ori games. But in many games, it’s just kinda there, not really utilized or part of the plot beyond a task to do. That’s the case in SOTM. I’m just bored with it.

SOTM is also very linear. Don’t let the lush rolling landscapes fool you, most valleys lead to from one side to the other, with no more to do in the open space in between than find a dead monk and his stick, and then move on. You move from one place to another, and beyond the occasional hunt for blue flowers or a totem stone to light up there’s not much else to do.

The puzzles are very simple and are unlikely to tax many. I never really went wrong, and that may appeal to some, but to me it meant I lost focus, and the impetus to continue. If you are led by the nose, you stop thinking for yourself, and you stop valuing the experience. What started as quaint and new, after three hours felt forced and linear. From that point, all that really compelled me to continue was just wanting it to be over. I had become bored by the experience.

There are eight chapters, six with tasks and puzzles and monks to find, but the last two are almost hidden. You think you’ve finally come to the end after chapter five and six really took a long time to complete, and then chapter seven appears from nowhere with a really dull long linear path, no puzzles and little beyond just trying to race through it. It felt uninspired, just trying to bolster another half hour out of you before you can finally lay down your weary head and rest.

If you look for all the monks as you go, SOTM will take you around 5-6 hours to complete, so it’s a bit longer than the tragically short runtime of Resident Evil 3 recently. It’s probably a bit longer than most of us spent on Journey, which strangely felt fuller and more deliberate.

I’m disappointed because I wanted it to be better. You get to be a beautiful spirit fox, and for a while that was enough. But then the game’s shortcomings made themselves more and more apparent the longer I played. Floaty controls, clipping, a bare and lonely world, music that really starts to loop after 6 hours, and puzzles that left me as cold as the Icelandic tundra.

To some, a short relaxing spiritual adventure through some lush environments will really appeal. For me, I wanted more than what was delivered. I wanted to be a fox, I wanted that feeling like when I was a wolf in Okami, but clearly there was a lot more to that game than I appreciated.

Sadly the lonely experience of Spirit of the North is only a transparent, albeit beautiful, imitation.

Spirit of the North is available now on PC (reviewed), Switch and PS4

Tags: Spirit of the North