Ori and the Will of the Wisps Review – Beauty and Precision 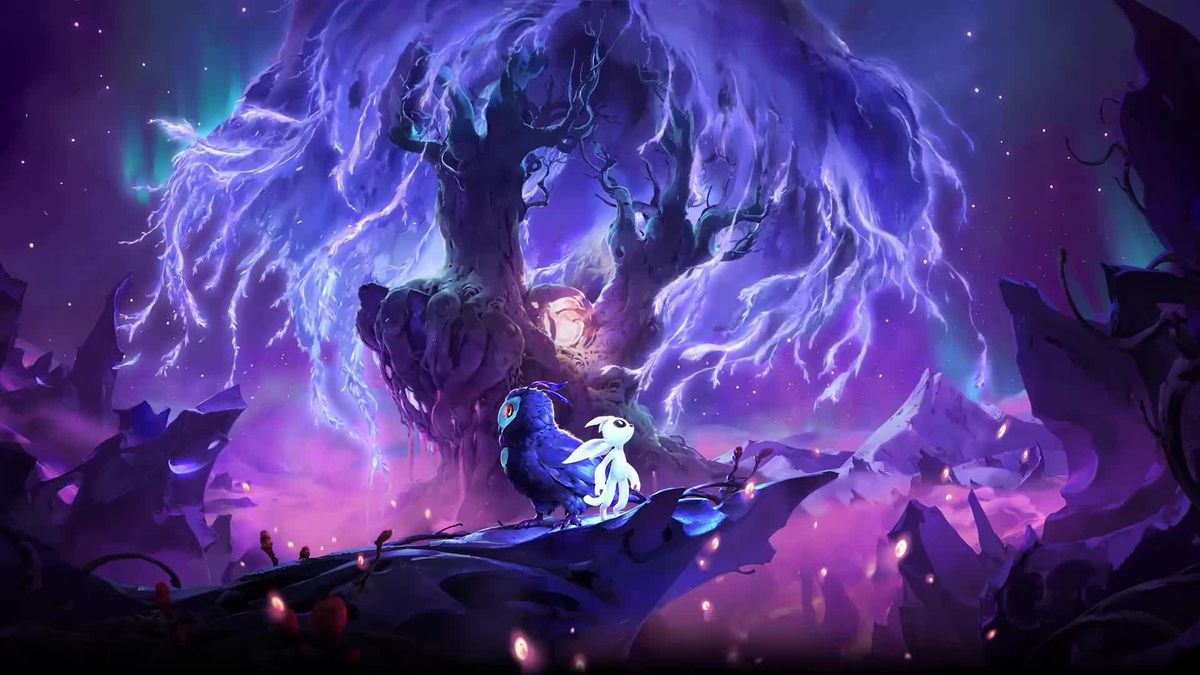 Toby Andersen
Ori and the Will of the Wisps does not disappoint, honing what was already a fantastic system and creating an often jaw-droppingly beautiful game to get lost in. The Finger Guns Review:

I don’t know about you, but as a kid I used to draw a lot, strange intricate doodles most of them, and one particular obsession was mazes.

Underground mazes, like a cross-section of a rabbit’s warren, where little tunnelling mole-like mechanicals would create deeper and deeper burrows. They were often filled with dens, where little families would lead their lives in futuristic little pods. I think I’d played way too many 2D platformers as a child, especially Super Metroid and Symphony of the Night, and definitely too much Abe’s Oddysee. You can see where the style came from.

Fast forward more than twenty years, and the 2D Metroidvania genre is not just alive in my little doodles anymore, but a staple of the indie scene. Recently Hollow Knight and of course the first Ori, have breathed much needed new life into the genre. The same people who grew up on Metroid, like me, are now getting their chance to use all the technology of 2020 to create wonderful indie videogames I could never have even dreamed of as a kid.

Ori and the Will of the Wisps does not disappoint, honing what was already a fantastic system and creating an often jaw-droppingly beautiful game to get lost in.

Ori 2 picks up where the first left off. Little Ori’s peaceful world (living with a freakish cute spider creature and Big Hero 6’s Baymax without their armour) is torn apart when a storm casts them far away from their home, adrift in a strange new world and split from their fledgling owl friend, Ku. So starts another epic adventure to find your friend before the monsters of this new world do. We should probably restore this world to its former glory while we’re at it.

And this new world is just as overwhelmingly beautiful as its predecessor, rich in the most vibrant saturated colours, it’s like a forest made of neon. And not just the art style, but the whole world of Ori is where the game really marks itself apart from any competition. It’s in the little details. The huge toad who speaks just like Jabba the Hutt. The way none of the creatures really speak a language we know. The way Ori runs with their arms flung out behind them like Naruto. It’s in the deft handling of an emotionally resonant story, but without much in the way of a script. I’m telling you, just like in the first game, certain moments of this story will destroy you.

The forests and rivers, marshes and lakes and tunnels, may be beautiful, but they are blighted by evil and corruption. Neon purple is very very bad! Don’t touch, you have been warned. Ever since Okami, corruption has infiltrated many games, where restoring the natural world, that eco-friendly trope, has become commonplace. Horizon Zero Dawn, Ori, Okami, Infamous, the ill-fated Prince of Persia reboot. Set in a forest, it put me in mind of a very ecologically conscious game, with something of an environmental message to it. It not overt (it’s not Avatar, or Ferngully) but it’s there in the restoration of a forest to its former splendour.

Ori is a beautiful game, and it could be forgiven for resting on that. But it’s so much more than looks. It excels in gameplay, design, presentation and music. And damn, the music! Gareth Coker who scored the first game returns with a soundtrack that is heart-wrenchingly soulful, full of little twinkles and strings that fill your heart with joy, or the darkest saddest chords to provoke longing or deepest sorrow. A new track accompanies each new area and has its own wonderful and memorable refrain. Rarely does a game tug on the heart so much, or with such skill, and its thanks in large part to that score.

The gameplay loop on show here is the Metroidvania genre honed to almost perfection. Explore, find a new skill, that skill allows access to hitherto locked off areas, where you will then find even more skills, and so on; a gameplay loop that seems to never get old. I can start this, fully aware that I had many of these powers in the previous game, and I have no issue with being drip-fed new skills one at a time, trained in how to use them by deft puzzles and platforming demands, and then set off in search of the next. No platformer would be complete without hundreds, literally hundreds of collectibles, but Ori tries hard to make them useful rather than arbitrary. Shards of crystal that enhance your health, or your skill power, experience orbs to spend on new skills and upgrades, and new to the second game, building orbs that allow one of your new-found friends to build homes and clear spikes from a hub area in the centre of the forest.

One entire screen of your menu is devoted to the collectibles and includes a massive number of one-off quest items to collect. Ori 2 has expanded and built upon its predecessor, adding new characters and friends throughout the new world, many with quests to complete, items to find or areas to explore. Yet somehow none of them ever quite feel like a fetch-quest. They are, don’t get me wrong, but the fetch quests are hidden behind the metroidvania system; you won’t be able to reach most areas until later, so instead of looking for these items immediately, you collect the quests and come across the items during the natural flow of the game. Return to your quest giver and gain a useful reward. It’s a great new system that fits snugly in with everything else this developer does so well here.

The beautiful gameplay design is also more than just the tasks you are given. It’s in the responsiveness of the controls, the pixel-perfect hitboxes, the accuracy of button presses. If you mess up with a control system this responsive, you can’t stay mad. You know it was your fault. The movement has the tiniest floatiness, but it’s the perfect amount – it’s been deliberately designed like that.

The skills you gain throughout the game are often fantastically designed. Each has a little Hollow Knight style orb associated with it in the menu, so you can change your loadout as needed. The first time you receive a skill orb, it not just extra health, it’s a frikin’ lightsaber. After ten minutes or so exploring unable to really defend yourself, the sudden ability to slice and dice your foes really gives a sense of bringing balance to things once again. You are reminded just how much of a badass you became by the end of the first game.

The blue electric zapping power you get an hour or two in, is another one of my favourites – any patch of blue moss you can see, and you can zap to it. This gives an already maze-like game even more interesting verticality. Ori already had free range of the floors and walls, now they have the ceiling too. Once you can use projectiles as miniature launching points you can effectively fly through levels. Obstacles, what obstacles? Oh yeah, those. By the end of the game, you will be able to shoot through water and sand areas as well, launching of anything and everything and becoming unstoppable.

So let’s talk difficulty. Ori has a pretty simple first few hours, but the difficulty ramps up pretty quickly once your first few tasks are complete. Combat challenges, and intricate platforming sections are fine when you can take all the time in the world, but the game is chock full of fantastic, nerve-shredding chase sequences that require dexterous skill and timing to complete, all while you are panicking because the music has just built into this incredible epic crescendo. There are also a few incredibly scary bosses scattered through the game, some of which will test your skills to the absolute limit. These are not for the faint of heart, and even their intros will give small children nightmares. And you will die, a lot. But somehow, however hard the game gets it rarely deters. If you really cannot make it, you probably haven’t found the skill you need yet, or you should come back when you are stronger.

With a game this good the only niggles are small ones. There were a few glitches; the most common on Xbox One which I played on, was where the game would stutter and take 5 seconds to load, making you think for a moment the system has bombed. It recovered every single time, no game breaking bugs, just annoying really. I also got stuck in the scenery a couple of times.

The me who drew intricate underground mazes in his exercise books as a kid, finds endless joy to be had exploring the paradise pools, haunted tunnels, and snow-capped peaks in the new world of Ori and the Will of the Wisps. With a system this well designed, gameplay this precise and satisfying, art this beautiful, monsters this haunting, and a story this magical and emotional, there’s not much to quibble over. Ori 2 is a triumph of the Metroidvania genre and takes its place alongside Hollow Knight as the absolute pinnacle available on any system.

Ori and The Will of The Wisps is available now on Xbox One (reviewed) and PC.

Disclaimer: In order to complete this review, we downloaded this game from Xbox Game Pass.

Ori and the Will of the Wisps (Switch) Review – The Perfect Port?

Ori and the Will of The Wisps arrives on Switch today.