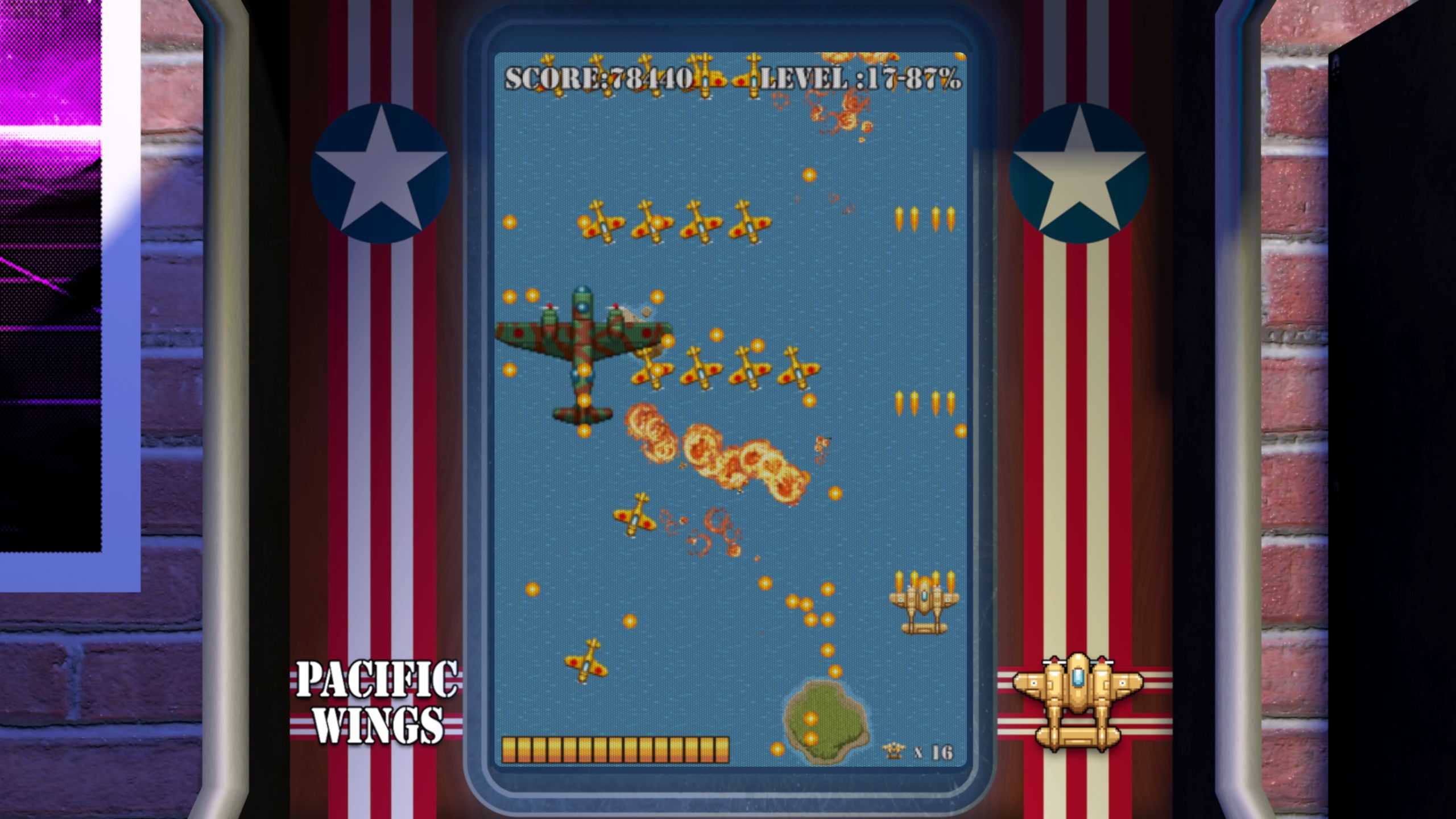 Some games should remain on mobile. Pacific Wings is one of those games. The Finger Guns Review;

Some games should remain on mobile. Pacific Wings is one of those games. The Finger Guns Review;

During my 5 years with the PS4, I’ve seen it do some extraordinary things. I’ve seen post-apocalyptic worlds rendered at 4K. I’ve seen visuals so true to life that I question whether it’s real or not. I’ve seen games run smoothly when populated by hundreds of other players. So why is it that Pacific Wings, a port of a retro-styled mobile game that originally released back in 2010, runs like utter dog shit on the PS4? Because it’s an ill thought out and poorly crafted version. That’s why.

In case you weren’t one of the 2+ million people who has already played Pacific Wings for free on mobile, tablet or PC, this is a scrolling shoot-‘em-up that is very obviously inspired by Capcom’s classic arcade game ‘1942’. You control a WW2 fighter plane that’s forever flying upwards and can patrol the full length of the screen while shooting down the various air craft that fly in to attack you from the front, the side and even “your six”. Some planes require a single hit to down them, others need a number of shots before they’ll fall. The game mixes up what is attacking you quite regularly and adds new angles and flight patterns for you to deal with – but for the most part you’re just shooting at everything and anything you see while avoiding any bullets fired your way.

Every so often, a solo plane will fly by and if destroyed, drops a power up. By collecting these power-up’s you increase your fire power which stacks 4 times. At max fire power, each shot also shoots diagonally forward and backwards which makes you a formidable flying menace – but if you get hit by a shot from an enemy plane, you lose 1 stack of weaponry. Lose all your stacks and the next shot to touch you will destroy your plane and cost you a life. This system encourages cautious play and repeated learning of the levels because the difference between having all 4 weapon stacks and none at all can make parts of this game a breeze or a bullet hell nightmare. If you do happen to fly yourself into a cul-de-sac of bullets, it’s often impossible to recover from, especially in the later levels where you feel totally outnumbered and, if you’ve lost your stacks, always outgunned.

Made of 20 levels, each of which gets progressively more difficult, Pacific Wings was a smart little time filler on mobile devices. Unfortunately, the one aspect of this game that made it unique on those platforms – the fact that you didn’t have to shoot with the plane, just avoid the myriad of bullets coming your way while the game did the shooting for you – has been removed in the PS4 version. By doing so, it plays like every other shmup, requiring you to press X to fire your guns. With this removed, It falls into the same genre as Velocity 2X, Pawarumi and Rogue Aces and, I’ll be honest, the play feel, variety and visuals of Pacific Wings pale in comparison to its peers in almost every way.

To keep the original mobile phone display ratio on screen, the entire of Pacific Wings on PS4 is played within a window positioned in the centre of the screen. It’s surrounded a stylised back drop to make the most of what would otherwise be blank space. This simply isn’t an adequate solution to getting a mobile game to run on a console. The game feels squashed and it’s even harder to read the action on a TV screen than it was to read it on a mobile phone.

This is not to mention my biggest bug bear – the freezing. At least once per level, Pacific Wings freezes up for half a second to a second. It’s often just as one of the flying fortress style enemies enters the screen and sometimes just as you collect one of the weapon power-up’s. There’s nothing more frustrating than getting into your groove only for the game to freeze up. Even if it’s for an instant, it breaks your concentration and in a game like this where the finest of margins can mean the difference between losing a life or finishing a level unscathed, this freezing shouldn’t be happening. The kicker – the free version on mobile devices doesn’t have this issue. Those 9 year old versions run seamlessly without freezing at all.

Pacific Wings on PS4 is a prime example that some games should stick to the platforms that they’re designed for. By removing the one interesting element of the original game and the squishing the action in the same aspect ratio on to a TV screen, surrounded by useless space, this game doesn’t look or feel as fun as it was on mobile devices. For whatever reason, the port onto PS4 has also brought with it some technical issues in the shape of freezing. For a 9 year old game that ran nigh-on perfectly on an iPhone 4, this is unacceptable.