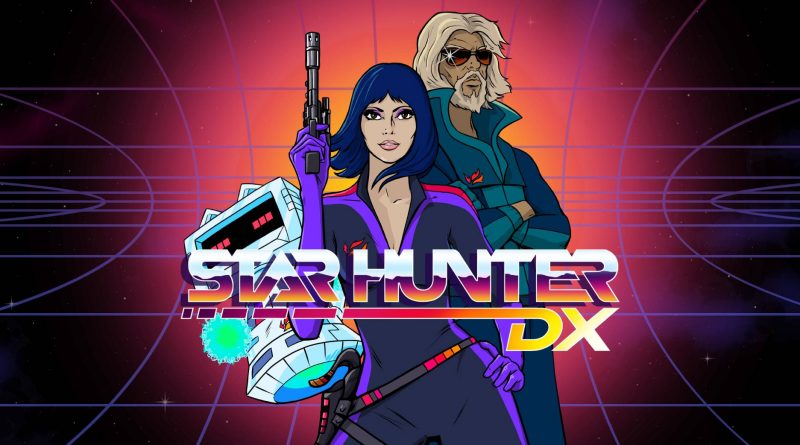 Bullet hell shoot ‘em ups are nothing new to PlayStation owners – there are an abundance of classic side scrollers and top-down shooters to fill even the deepest retro boots.

So what makes Star Hunter DX so special? Well for starters the classic pixelated graphics look like the best the 16-bit era could muster, and the cut scenes and music remind you of 80’s Saturday morning cartoons. That music is something really special and I hope it gets a standalone soundtrack release of some kind. It really adds to the game, and whilst spending my time with Star Hunter DX I felt a wave of nostalgia like looking through the dusty family photo album.

Ok, so there’s great music, but is there a story? Well, yes, but only of sorts. Nothing to write home about, but perfectly suitable for a game of this type. Simply put, you play as a betrayed starship captain who’s cruising through the galaxy seeking out revenge. Like I said, it’s not groundbreaking but does the job it needs to do.

Aside from the amazing music and the wonderful graphics, there is something else that helps Star Hunter DX break the normal boundaries – and that’s strategy. The game is based on the high-speed performance that shmups are known for, but this time you get the help of four special gun types.

First comes your rapid-fire cannon; with a press of the X button, your ship sprays screen filling multi-stream laser death at the oncoming foes. With a swift press of the square button, you can change to a more focused powerful laser.

Triangle gives you some breathing space by putting the game into the game’s cool slow-motion bullet time feature, and finally you have your bomb. Not the screen clearing type you may be used to, but one that shields you for a short period and also destroys any enemy that comes in its path. Learning when to use these different weapons makes the game far more strategic than you might think. It reminds me of the great Resogun in that respect.

There are plenty of difficulty levels to keep even the most hardened shoot ‘em up fan’s eyes screaming at the screen. There is also a robust tutorial, practice modes and score checkpoints to keep the entertainment coming. It’s a good thing that there is a practice mode because this game is HARD, with lots of features to get to grips with so you can get the most out of the game, stop dying and stop the repetition setting in.

It has a light arcade feel, something you can turn on and blast away at for half hour to see if you can beat that score. It’s pretty standard really for indie games, but wrapped up in some great pixel aesthetics, which helps keep the game fast and furious without slowing down when the screen is full.

Not All Rose Tinted

There are a couple of things that sullied my experience with Star Hunter DX. Firstly, it is hard, way hard and this is in part due to the odd decisions 1CC games have made. The game provides you with three characters to choose from. Two are locked from the start, and one of the locked characters is essentially a stand-in for the game’s ‘easy’ mode.

This character can only be unlocked once you beat level three on normal, which is an achievement in itself. What i mean is, if you can beat level three, you may as well stick to the difficulty you’re on.

Secondly, in the quest to fill up the various bars on your ship, destroyed enemies drop blue energy that tractor beams over to you. When the screen is full (and I mean literally full) you can’t tell what is a hail of enemy fire and what’s the energy you’re supposed to collect. It gets to a point when the screen fills with so much enemy fire you literally can’t move and have no choice but to get hit.

None of the above are deal breakers but there are some odd decisions in this game non-the less. And it’s a testament to the game itself that it retains its pick-up and play style despite the flaws.

Star Hunter DX won’t win any awards for originality, Shoot ‘em ups like this are one of the oldest genres known to man. But it has a little originality in the strategy department, with lots of options to tailor the experience to your own personal style.