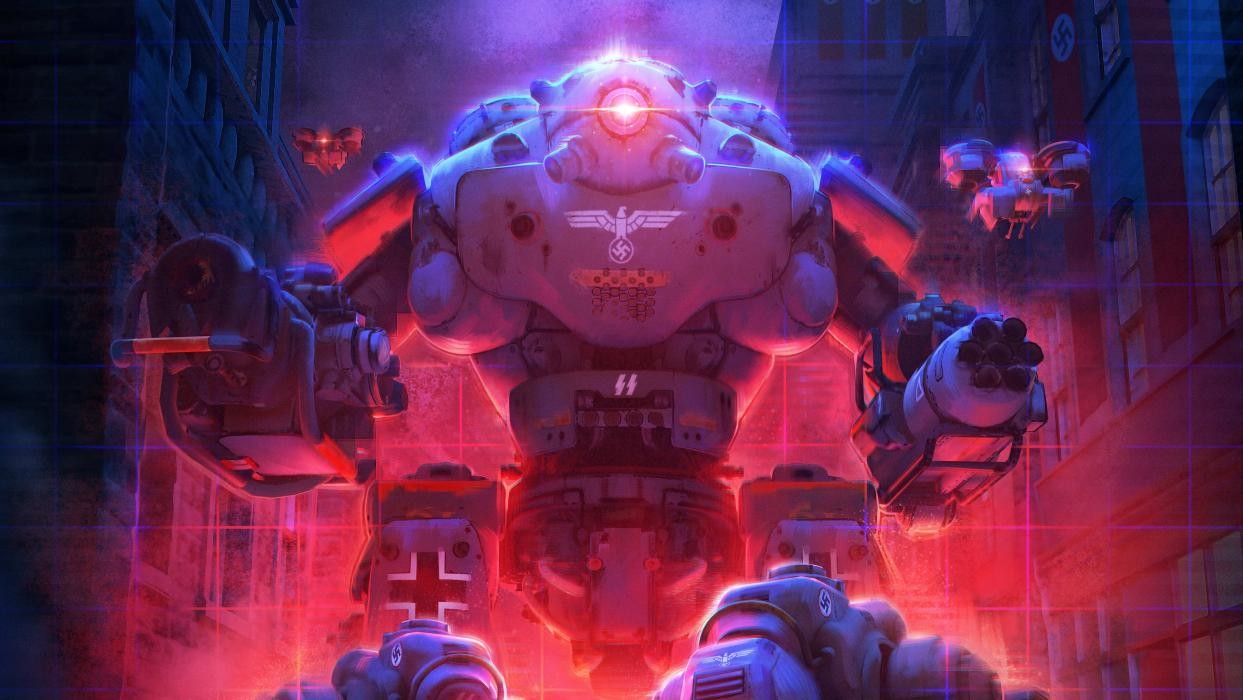 One of the favourite past-times here at Finger Guns Towers is shooting Nazi’s.  Our go-to game over the years for quenching this most gratifying of hobbies has been Wolfenstein. A game that’s been on pretty much every single conceivable system since its inception in 1981 with Castle Wolfenstein (not the 3D game you’re probably all thinking of, but a 2D platform in the guise of Manic Minor).

It wasn’t until 1992 that we were treated to the 3D delights of Wolfenstein. Anyway like buses two Wolfenstein games have hit our lofty towers at once. The first is Wolfenstein Youngblood which is pleasing Sean Davies in many suspicious ways as we speak. And I get the opportunity to take on the Nazi’s in a hulking great mech in Wolfenstein Cyberpilot. That’s right, I can now flame roast those pesky Nazis, all from the comfort of my PSVR headset. However, despite being completely tailored to VR it seems killing the Third Reich isn’t as fun as it should be.

Cyberpilot is set in 1980’s Paris, just like Youngblood only this time you play a skilled hacker hired by the resistance to pilot a variety of captured mechs by way of an in-game VR system to help turn the tide of the war. You are treated to three types of mechs; a flying drone the Panzerhund and the mega Zitadelle, all of which Wolfenstein fans will be familiar with. Each mech has its own set of weapons and abilities to help you mo down those pesky Nazi scum.

Before you start your stomping massacre, you have a bit of fiddling to do to get your mech working properly. To do this you need to find a faulty panel in the Mech, crowbar it open and remove a memory chip and replace it with a new one. This area also serves as a hub to progress the story. And credit, where it’s due the game looks great, and riding up and down the lift to the various floors in the factory, is good fun. Unfortunately, at times the VR can be clunky mainly due to the control method. One section has you making a gun from various parts of machinery both hands are needed but you only have the DS4 to control both hands. Compared to a similar level in Batman Arkham VR it was terrible.

Once you have your mech prepped it’s off the VR room to begin your mission in the Panzerhund. Once the game begins for real you quickly realise that Cyberpilot is just not very interesting. Paris is baron, and the only colour palette available seems to be grey. You would think with the arsenal of weapons available to you throughout the game, like a great big flamethrower, a Gatling gun and rocket launcher it would be impossible for Cyberpilot to be dull, but it all just feels very uninvolved and detached from the action. Partly because you’re playing from a VR unit in the game and not actually riding a great big mech and partly because Paris is so empty and dull and grey and sparse of action. I guess it doesn’t help that the ‘cockpit’ is just as bare as the Parisian streets just a simple monitor letting you know what you need to do.

I’m not sure why the developers didn’t actually put you in a mech but here we are. Another factor is the control method. Inexplicably they have mapped the in-game arm movements to the DualShock 4, yet have two separate hands to operate on-screen. It feels like you are in handcuffs. The weirdest part of this is that the in-game VR  controls are two separate joysticks!!  Surely it would make more sense to have Move support? Things get even more problematic as you have a button on your left to push for a panic ability, and on the right of you is a recharge shield tool which you have to plug your on-screen controller into to recharge your shields. So as your hitting your button and then perhaps recharging your shields, in-game at least it looks like you are kind doing this virtual dance while playing. Hands to the left, hands to the fight and cha cha cha. its all very awkward feeling and I can’t fathom why they made this decision.

What isn’t awkward feeling however is how comfortable the game feels. For a game that has full freedom of movement, and especially given the floaty feel you have been in a VR, VR cockpit, Cyberpilot isn’t the spew-inducing vomit fest I thought it would be. I played the game on just the standard settings with 30-degree rotation and no vignette and found it just fine, even when close to scenery and walls.  If you do find things a bit nauseating there are options to adjust things like the rotational angle and to add a vignette should need them. Thanks to developers Arkane Studios and Machine Games for not linking the crosshair to your head movement but instead linking it too the DS4 makes for a much more comfortable playing experience, I really don’t know why other developers don’t use this option. It does feel counter-intuitive at first but once you get used to it, everything works and feels just fine.

After all the hard work of creating a fine, good looking VR experience, the game itself is one step away from being an on-rails shooter. You walk through the dull-coloured, empty streets of Paris until you reach a bunch of enemies to be toasted.  Walk some more to reach the next collection of Nazi’s and shoot them. Rinse and repeat until you reach the end of the level. The levels are also fairly short and there are only 4 in total which makes it very linear with no alternate routes for you to find or explore. As far as games go, this feels like a glorified tech-demo rather than a full game!

One of the robots you get to control later on is the Drone, which fans of the series would have seen before. This is the only level that lends for a little bit of variety. The idea is to search the level for computers to hack while avoiding guards. The weapon assembled in the workshop earlier allows you to stealth stun enemies, while the panic button allows you to have a short time of invisibility. A refreshing change form all the destruction as you can actually explore a little and have to think about what you’re doing. The downside to this, of course, is the motion. As you can imagine, flying a drone around in VR, VR doesn’t make for a comfortable ride unless you have the steeliest of stomachs. It’s not terrible, but just not as comfortable as when you’re in one of the ground-based mechs.

Although everything looks great and some of the weapons are a bit of fun, plus there are some good ideas sporadically dotted through the game destroying Nazi’s in a bloody great big mech should be the best fun ever but it’s simply not. The weird decisions from the developers to have the controls DS4 only and not have you pilot, the mech directly just ruins the illusion and detaches you from what should have been a great gaming experience.

And the game will only last you an hour, hour half at most and with absolutely no replay value whatsoever you would feel a little short-changed for your £15. Although, it should be commended on how well the VR works in not making feel nauseous, at least for the most part of the game. Perhaps this was just a dry run demo before the Arkane and MachineGames produce a more meaty, full game. If you want to kill bad guys, then perhaps give the Nazi’s a rest and turn your attention to East End gangsters.

Wolfenstein Cyberpilot is available now on PSVR (reviewed on base PSVR on a PS4 Pro).