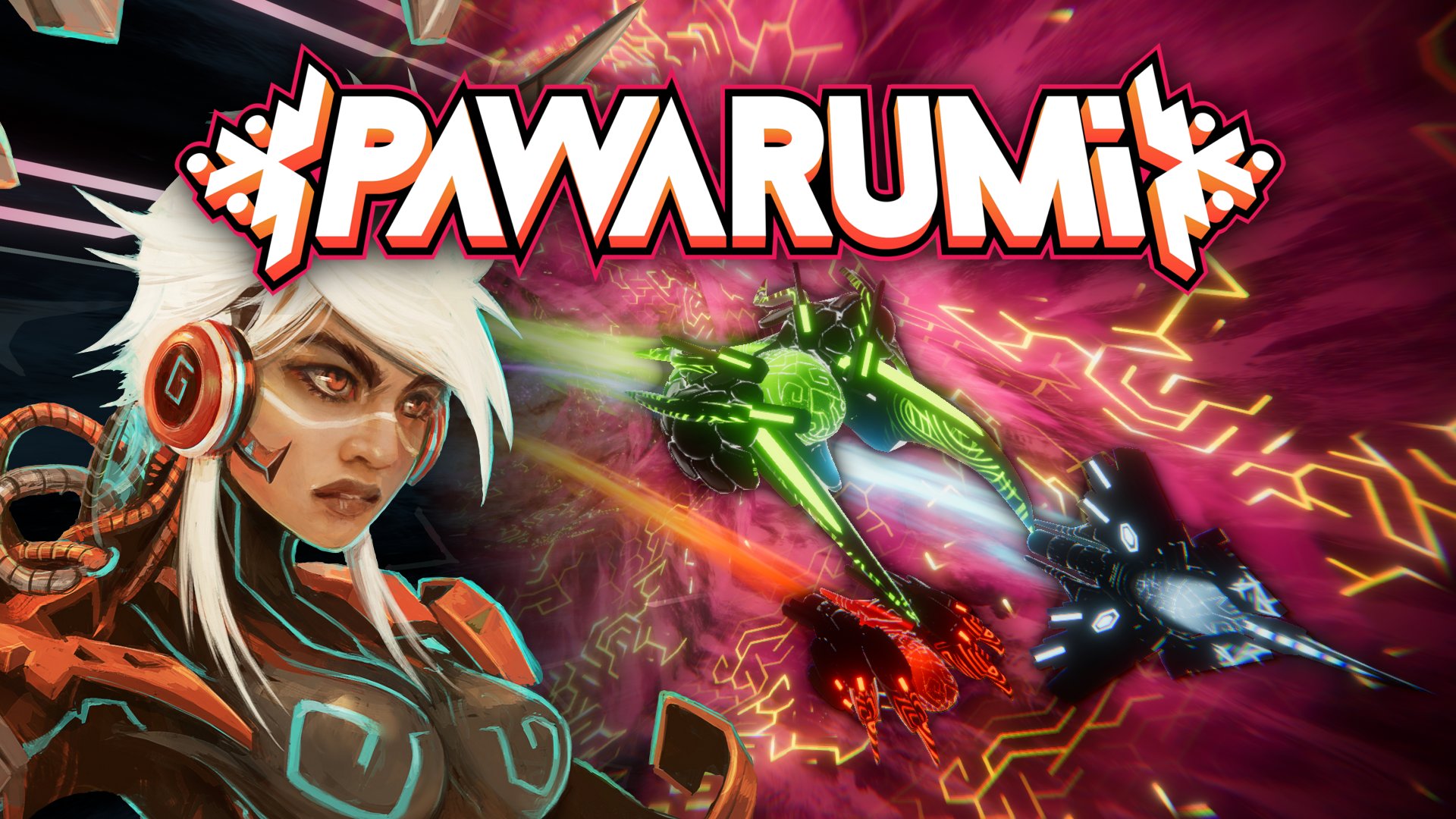 Pawarumi is a colourful vertical scrolling shooter in the vein of Treasure's troves, but will its difficulty scare people off? The Finger Guns Review

Pawarumi is a colourful vertical scrolling shooter in the vein of Treasure’s troves, but will its difficulty scare people off? The Finger Guns Review.

Coin-op shooters used to be all the rage in the halycon days of arcades. Companies like Capcom, SNK and Taito dominated a once-popular market of shoot ’em ups (or ‘schmups’). Titles like Ikari Warriors, Gradius, TwinBee and many more in between were notorious for their tough difficulties and coin guzzling ways.

Usually categorised as either vertical scrollers, which are a top-down perspective style, or side-scroller (which is pretty self explanatory), the transition to consoles has always been a cherished yet not groundbreaking category. But none gain as much notoriety as Treasure’s Ikaruga for the Dreamcast and GameCube in 2002 and 2003, respectively.

You may be wondering why I mention Ikuraga a fair few times in a review for Pawarumi? Well, they say imitation is the sincerest form of flattery. Right down to the tongue-twister of a title.

As you may have gathered from that wordsy intro, Pawarumi is difficult. It’s difficult in a way that pays homage to the aforementioned, but that is not the same as unplayable. As with most things the more you play, the less often you’ll die…in theory.

You see, back before we had “the Dark Souls of [insert genre]”, some games were just naturally hard. Not from any particular brand of malice from a director, or deliberate urge to seriously inconvenience speedrunners. They were just borne of an era descended from arcade games that were designed to eat credits, a trend which still carried on to consoles and handhelds.

This, ultimately, is what will create the divide between gamers. I don’t mean that as a slander to the standard tropes of hardcore and casual gamers, but more to those that like a challenge with their shooters, or those that want to take on the majestic sights and sounds that the shoot ’em up offers. Whilst Pawarumi leans towards the former, it certainly makes you want to get better to appreciate the latter.

To put it bluntly, Pawarumi is a gorgeous game. It’s not pushing the boundaries for lifelike textures, realistically proportioned and scaled worlds, or fully rendered cutscenes. It has its aesthetic down, and that’s what it’s sticking to.

Described by developer/publisher Manufacture 43, It’s set in a “pre-Columbian inspired futuristic universe“, and whilst that sounds contradictory and oxymoronic, it’s not far from the truth.

The Aztec theme is apparent, with locales ranging from temples, deserts, dense woodlands water features, all the way to collapsed ruins, lava flows and all-sorts in between. All of this is created in a chunky-ish style, not wildly out of proportion like Rare’s style of design, but not hyper-realistic either. Enemy ships, meanwhile, have a look somewhere between units from R-Type and the Gummi ships from Kingdom Hearts: not smooth and sleek, but not chunky Lego shapes either.

Then there’s your ship, the legendary Chukaru. What makes this ship the almighty bringer of doom are the weapons bestowed upon it by three gods. Essentially, this is lore-speak for what is the game’s unique take on the shoot ’em up genre: it’s basically rock/paper/scissors with colours.

You have three attacks with the Chukaru, that either by forward thinking or coincidence are colour-correspondent the the Xbox One controller (that I reviewed this on). A fires an endless volley of green projectiles, X is a continuous blue beam that hits several enemies at once (see above), with B firing locked-on energy missiles at several targets at once.

The standard method of who wins what is explained in the tutorial; blue is stronger than green yet weak to red, red is strong on blue and weak to green, whilst the green is strong on red and weak to blue. All pretty self-explanatory, right? Well, this is but one of Pawarumi’s little tricks up its sleeve when it comes to the combat. This is one of three styles of attack, known as the Crush. It works very similarly to Ikaruga’s use of polarities against enemies, but that’s not the only uses that the weapons have.

Unlike Treasure’s hard as nails shooter, you actually have a shield in Pawarumi that can withstand a few hits (depending on difficulty). Unlike staples like Gradius and Parodius, there are no pickups in this game. Yet shooting an enemy with the same colour is a useful if double-edged sword. Appropriately named Boost, shooting an enemy with a like for like colour will actively recharge your shield, but will also make said enemy stronger. Not levels of indestructible stronger, but will boost both offence and defence of any affected units. So you can recharge your shield, at the cost of being more cautious until those buffed units go down.

Lastly, rounding out the tactical trilogy, is the Drain ability. Reversing the polarity of the strengths/weaknesses listed above, this doesn’t add or detract any damage you inflict, but instead charges your super move. Y’know, that’s usually the move in these type of games that decimates everything onscreen, allowing a bit of a breather before progressing. Whilst it’s exactly the same in Pawarumi, it’s an absolute spectacle when it’s used. Imagine playing Geometry Wars, when there’s a lot going on at once, just to unleash one of those bombs and the aftermath that follows. It’s rather glorious.

As far as gameplay goes with Pawarumi, that is essentially your lot. There’s three difficulties to choose from, much like Starwing used to be: the easiest has less courses, whilst the hardest has the full shebang. Dying will end your run though, so you want to make sure you’ve got those earlier missions down pat before you start attempting the bullet hell stuff.

In terms of story, what do you really need from a game like this? As Axo, the newly designated pilot of the Chukaru, you are treated as a heretic for not following the views of your peers, thus leading to your rebellion and motive for stopping them. Exposition comes at the beginning and ending of levels, usually just before a boss fight. Whilst there only five courses, the story and level order does differ between story playthroughs. Much as I’d love to spill out what happens to you… I can’t get very far on normal. Not through laziness or lack of trials, it’s just a bastard hard game.

Ultimately though, that’s a good thing. I won’t get on my soapbox and say games are too easy nowadays, but sometimes it’s nice to have a challenge. Just look at the Hotline Miami’s, Furi, Hyper Light Drifter, even Ikaruga and Radiant Silvergun: people do still want challenge, but one they can gradually work towards as an end goal. Throwing you in at the deep end as some kind of make or break is only going to half your players, at least. Whereas give players some gradually increasing difficulties, that’ll tease them into wanting to try something when they’ve smashed the easier ones.

So the point I’m trying to make, in a lengthy way, is that Pawarumi is a damn good game. Whilst it does only have a handful of levels, the replayability is there. There’s an active leaderboard to encourage you, as well as the desire to figure out what’s really going on alongside the harder difficulties.

It’s beautiful, it’s got a manic soundtrack to keep the adrenaline pumping, and it is a faithful throwback to the days of arcade past.

Just please don’t ask me to say “Pawarumi” out loud, because I can’t (He really can’t – Ed).

Pawarumi is available now on Xbox One (review copy), Switch and PC.