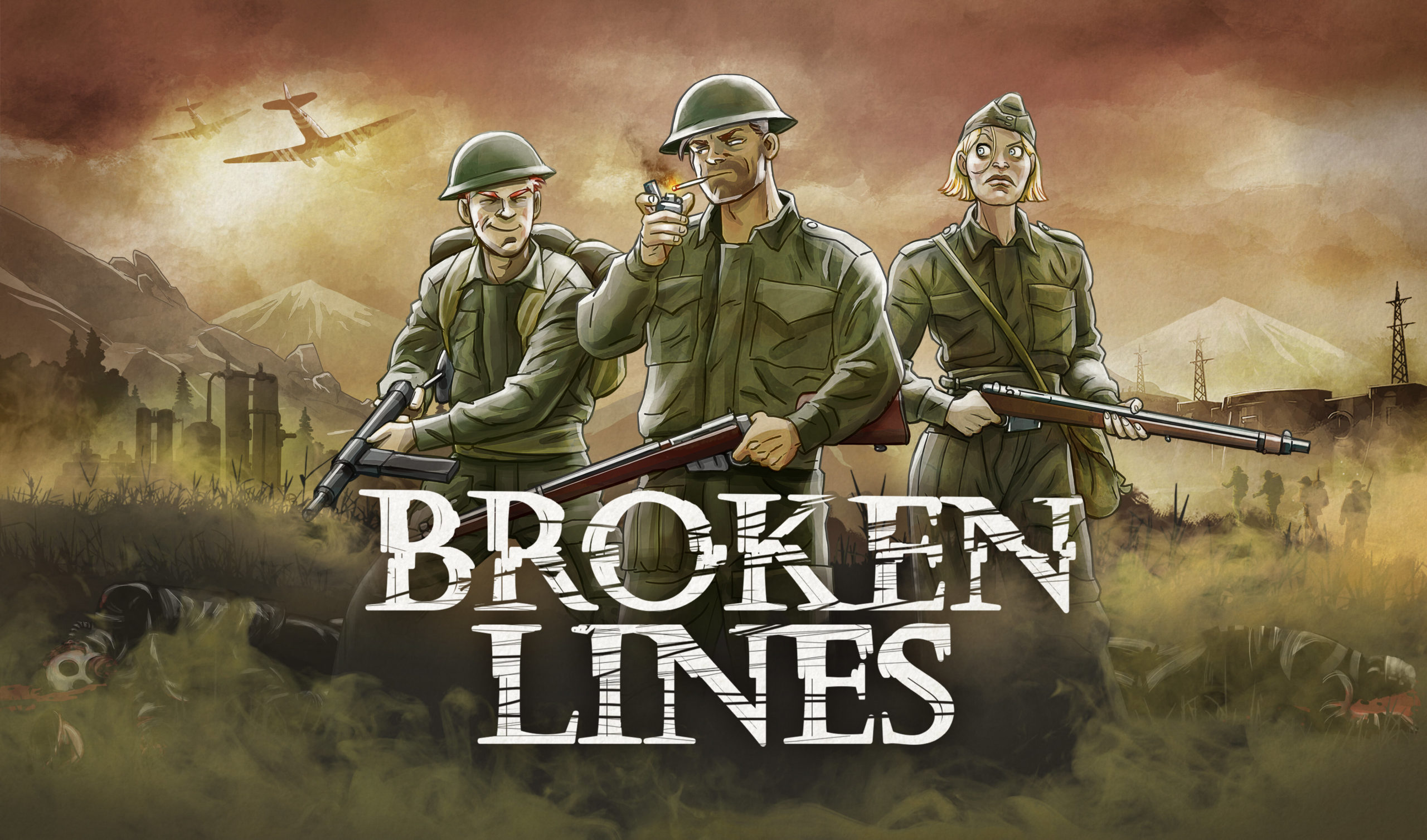 A narrative focused RTS set in an alternate WWII universe, Broken Lines is flawed yet still worth trying. The Finger Guns review.

Broken Lines is XCOM meets Peaky Blinders: Mastermind set in an alternate WWII timeline with a hint of Saving Private Ryan narrative structure. There’s a lot going on here and pulling off an iteration of XCOM is always tough when the original inspiration has set such a high bar.

Nevertheless, Broken Lines gives it a good wallop. It won’t be in the upper echelons of tactical strategy games, but it has some enjoyable moments that may make this worth the investment if you’re into WWII settings and birds-eye-view strategising gameplay.

It’s more a Lee-Enfield than an M1 Garand, but let’s drop behind enemy lines and see if Broken Lines can achieve its mission.

Set in an alternate universe of WWII, Broken Lines follows a set of 8 soldiers who’ve found themselves shot down in enemy territory. The Faceless are out in force and are involved in some mysterious plot involving a noxious gas that’s pervading through the countryside.

As commander, your job is to guide the squad out of this horrendous quagmire, either achieving your mission en route or prioritising their survival above all else. Broken Lines sets up interesting moral dilemmas through the campaign, requiring you to make tough decisions that’ll ultimately affect squad morale and which of the multiple endings you’ll reach.

Part of this involves the mission structure. At each juncture, you’ll need to select one of 3 available missions. Hit a Faceless camp for retribution or assault a depot for explosives you may need later? Your decisions will determine your readiness for later levels and will also be testing your ethical fortitude: are you mission-above-all-else or will you ensure the safety of civilians if it risks losing time or resources?

The campaign structure is really good and whichever route you choose locks you out of other missions, which incentivises repeat playthroughs nicely. Personal squabbles between your soldiers come off less positively, boiling down to random events between levels and text screen interactions.

There’s a surface level relationship system going on but I found myself glazing over a bit and struggling to feel particularly connected to any of the troops, which is a bit of a shame. Overall though, there’s enough here to peak your interest for a couple of campaign runs.

Broken Lines certainly looks intimidating from its tutorials. Movement types, cover, flanking, panic status’, it hails a lot of mental gunfire at you very quickly. Thankfully, it’s more intuitive than it first appears. Entering a mission, you’ll select up to 5 of your squad to take part in battle.

Movement and combat are handled with a mix of turn-based selections and real-time flow over a few seconds as yours and the enemies moves play out. If you tell your units to move to cover, you’ll helplessly watch on as they dash for the wall, whether it’s to safety or to their doom. You select all of your moves at once before then hitting go.

Your units fire automatically, there’s no aiming required or statistical percentage analysis you need to do, which is more accessible than say XCOM. While there are abilities each soldier can utilise, it amounts to hovering over an opposing unit or area and clicking on it, so there’s not a lot of input from the player. Most of the work you’ll be doing will be assessing the environment and enemy positions to try and set up your attacks successfully.

While Broken Lines heavily promotes flanking and lateral thinking however, the AI and design allows for some really simplistic victories. It works far more effectively to choose the fastest charging option and dash for cover right next to enemies as a whole squad than it does to meticulously or slowly advance. Enemies have a timer upon detection before they’ll react, so you can abuse this to simply overwhelm them much of the time.

There’s also a bit of a lack of variety in level structure that restricts you having to adapt all that much. A couple of missions introduce reinforcements or an ambush, but largely you’re always advancing on your opponent’s positions. It makes the gameplay element feel relatively simplistic and while it’s more accessible and forgiving, it undercuts the sense of accomplishment from each win.

I achieved a gold medal on every mission bar one on my first campaign, such is the ease with which you can use these tactics to instantly win.

Between missions, the squad will convene around a campfire where you can discover random text-based events and decide between the various moral conundrums. Your decisions will affect squad morale, potentially leading to desertion, while it also influences your units’ panic meters. If a unit on either side gets suppressed or sustains too much fire, they may act wildly or run for the nearest cover regardless of safety.

The decisions are surprisingly black-and-white in most cases. Steal food from civilians to gain resources or be good-guy troops, that kind of thing. Your squad can be equipped with different weapons, main utility slot (e.g bazooka, med pack) and a secondary utility slot (e.g bandages, grenades), as well as traits and abilities. Any soldier can equip any weapon or ability, with only traits tied to their personality and unlocked through play.

It’s nice that any soldier can perform any role, but it reduces the sense of them being distinct from one another gameplay wise and loosens your need to look after any of them. I relied solely on rifles and submachine gunners in my playthrough, so even when one of my “core group” was injured, I could just swap their equipment over to someone else and wouldn’t lose anything from doing so.

There’s a shop provided to you by Izkor where you can purchase weapons, abilities and equipment using salvage you’ve earned from missions. The upgraded weaponry is needed the further you progress and take on more challenging groups of enemies, plus you’ll always be having to carefully select what you want, on account of you never having enough salvage to hoard everything.

An upgraded arsenal certainly helps your survival mission, but it won’t be a get out of jail free card either.

The last element is rations. You need enough food to sustain each night for the squad and if it falls too low your team aren’t going to be best pleased, so you have to ensure you have a solid amount of supplies to keep them going.

It all works relatively fine, but it’s missing an added bit of depth or consequence to make specialising and being attentive more meaningful. Rifles are your best friend in Broken Lines and while I know the M1 Garand has the best reload sound ever, it shouldn’t be carrying this much weight on its stock.

Broken Lines’ presentation is like a PPSH – satisfying to fire but wildly inconsistent. Immediately on loading any level you’ll witness a load of texture pop-in and rather hideous environments taking shape around you. Graphics and animations are not pretty at all, not even in a gritty, gruff narrative way.

It has a reliance on slo-mo final kills for every engagement which undercuts its supposedly serious story and slows the pace unnecessarily during longer missions too. Some enemy design is pretty impressive and a couple of the later, larger maps are well realised, but it all blends together to create a pretty unappealing game visually.

Having said that, the map drawings look great and I didn’t have any real technical issues or bugs, which I found pleasantly surprising. Audio is on the whole fairly good and the variety of routes for missions with various outcomes is appealing despite the repetition in landscapes you’ll be battling in. Some assets are reused far too frequently but I don’t want to be too hard on the game, as it is trying to provide a lot of content using very little.

Broken Lines ain’t a looker, that’s for sure. But, it’s a sturdy and reliable trooper if nothing else.

Broken Lines’ first impression isn’t a great one – it’s visually unappealing, the gameplay feels stifled unless you unintuitively charge opponents and a lack of deep decision-making suffocate your first couple of hours.

Yet, despite all of that, I actually quite enjoyed shooting my way through this alternate WWII hellscape. I was intrigued to see where my decisions would ultimately lead my team of war-torn squaddies and I took some pleasure from charging my foes with reckless abandon. It’s an inferior version of the genre, but it was also refreshing to be able to dig myself out of scenarios that you’d otherwise be decimated in in XCOM.

It has a lot of flaws, but Broken Lines has a decent… something… going on that’s hard to really explain. The best compliment I can give it is that I’ll be diving back in to see the alternate routes my journey could have taken, even if I don’t especially care for the consequences. Not often you can say that about anything WWII inspired.

Broken Lines is a decent amalgamation of XCOM and Peaky Blinders: Mastermind. Despite its multitude of flaws and unappealing visuals, there’s a bit of fun to be had navigating this squad through this alternate WWII universe. While it’s trapped behind enemy lines, there’s hope the squad can mend the broken to ultimately survive.