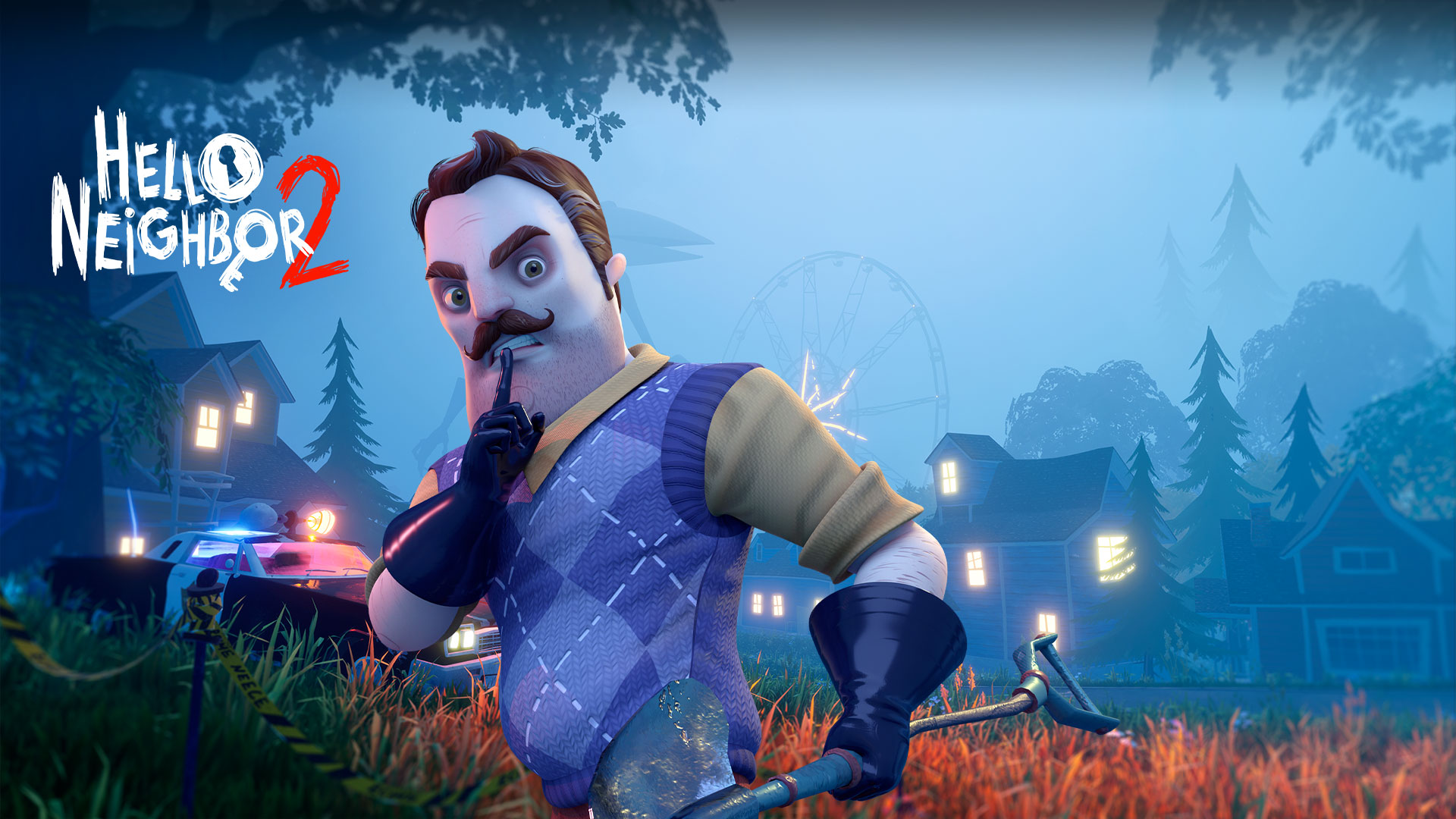 Uncover the dark secrets in the town of Raven Brook in this first person stealth horror - Hello Neighbor 2. The Finger Guns review.

Hello Neighbor released in 2017 to relative success as a game to watch other people play, thanks to YouTube and Twitch. The first-person stealth Horror game garnered a cult following that recognised the flaws, whilst loving the uncanny dark-Pixar art direction as well as the mysteries surrounding the lore. In the subsequent years, prequels, multiplayer spin-offs and DLCs released for the Hello Neighbor world; completely expanding the expectations of the game’s humble beginnings of the Alpha. Now, a numbered sequel is on the cards for Eerie Guest and tinyBuild – Is this a good jumping on point for the series?

In Hello Neighbor 2 you play as an investigative journalist who’s looking into the case of children seemingly going missing at the hands of Mr. Peterson – the antagonist of the first game. The moustache twirling, menacing people’s eyebrow-ing neighbour in the quiet town of Raven Brook has yet more to hide in the sequel. Though, he’s not alone this time round. Everyone in town has secrets; the Baker, the Mayor – all figure in a network of antagonists you’ll be facing in the game as you seek to uncover the truth.

Cut scenes link the levels together to create a through line in the narrative, whilst also servicing to give you the gist of things, but that’s just it. With the scenes being short and without dialogue, there’s room left to interpret through its visual story telling. The stronger parts of the story are the subtle hints you see throughout the levels that suggest a direction. I feel Eerie Ghost have lent more into the direction of letting the fanbase come up with theories. For someone who’s only played Hello Neighbor 2, it means losing a lot of what the game subtly puts down and even by the end I’m left with more questions.

If you’re a newcomer like me, a lot of what the story has to offer may go over your head. However, this has piqued my interest in going back to the earlier games, or maybe searching down a YouTube video discussing the lore iceberg that Hello Neighbor definitely has. A feature I would’ve appreciated would be a Journal that takes notes as you play – a visual and written log of characters, events etc. Something minor just to help keep up with the goings on.

Hello Neighbor 2 plays as a first-person stealth game with horror elements added into the mix. As the journalist, you’ll be entering the residences of Raven Brook to help unlock the overall goal. Each house has a multiple step puzzle to solve that achieves a feel not unlike a reverse Escape Room. Instead of sifting through each room of the house to get out, you’re looking for a key or a piece of a puzzle that’ll give you a number of a code to help you explore even more of the rooms before reaching the end goal.

However, you’re not alone when solving the puzzles as each house is occupied by an AI antagonist that’s supposed to learn from player behaviour to counter your playstyle. Compared to the first game, it does feel like some of the features the Neighbour would perform are stripped back. There was never a time where they placed a trap to catch me or changed in behaviour as I progressed. Instead, they would often just quietly roam the whole building and before I know it I’ve been caught and thrown back out on the street like a stray cat. It’s a shame as the promotional material for Hello Neighbor 2 states that there’s advance AI that develops over time, but I sometimes found them staring at a wall, letting me go about my task as I please.

The AI coupled with the lack of consequence of being caught just made me run into the house, do what I need to as quick as I can and get out. There was nothing to prep or outsmart, rather just brute forcing my way until I could solve the multiple puzzles set. With all that being said there was complaints for the first Hello Neighbor having non-sensical solutions. I’m happy to say as a newcomer I wasn’t initially aware of those complaints and in Hello Neighbor 2 they’re not as obscure. In fact, the signposting for each puzzle and solution is crafted well without just giving you the answer. I felt like a genius completing them with no frustration in the process. Though I did run into a few bugs – namely losing key items in my inventory, or progress not being recognised – it was just a case of going back to the main menu then returning, and with quick load times it wasn’t too much of a bother but still an annoyance.

Catch Me If You Can

On the surface, Hello Neighbor 2 has a distinctly horrific childlike art direction. Walking through the neighbourhood and coming across Mr. Peterson’s house for the first time was reminiscent of the 2007 film Monster House. Both the game and film share awkwardly shaped limbs and characteristics that make the visuals off kilter, unnerving whilst remaining suitable for a younger audience. The jagged and angular architecture is Tim Burton-esque in execution just adds to the strange atmosphere the game presents.

The game runs at 30fps, but with a lack of visual settings for a game on the PS5 this is a bit of a downer. The ability to turn off motion blur, or favour performance over visuals is potentially a symptom of being so spoilt playing PS5 games. However, the combination of screen tearing whenever I move the camera too fast and occasionally dipping frame rate, the colourful and unsettling visuals packed into Hello Neighbor 2’s art direction found themselves lacking.

The score matches the tone the visuals present nicely. In the open sandbox areas there’s a slick droney electronic piece that’s hard not to compare to Stranger Things. It’s slower, subtle but equally as atmospheric as the comparison and it sets up the world nicely. In the tenser moments where you’re sneaking about, the music disappears in favour for the elements in the house you’re infiltrating. Creaky floorboards, smashed glass and even doors slamming can attract the attention of the Neighbour you’re hiding from. It creates a tension in the opening hours when you’re discovering how the game ticks. It doesn’t necessarily have the same gravity in the first hours, compared to the last, but it’s a neat attention to detail that further immerses you in the world.

Hello Neighbor 2 is definitely more streamlined than its predecessor whilst also being bigger. It feels like an improvement generally but it’s still a little bit empty because of the expansion. The promise of a more open sandbox has slightly been met. You can explore the neighbourhood at your leisure, but it still has a singular direction making it a moot endeavour. I would’ve liked to take on the different levels/houses as I come across them. It’s a short game with a 6-10 hour run time depending on your puzzle solving skills with the only replayability being improved efficiency on your second attempt. The lack of experimentation this go around is a slight step back, but what it loses in opportunities, it gains in coherency when beating it.

Hello Neighbor 2 is a mixed bag when compared to the rest of the franchise. The AI still needs to show more intelligence and the performance isn’t spectacular – even on PS5. The story may put off newcomers but fans of the series will hopefully enjoy what it has to offer in its mystery. Puzzles have been greatly improved which makes a good chunk of your playtime more accessible and enjoyable, but the counterparts keep it down from being great.

Hokko Life Review (PS4) - Hokko Crossing and Animal Life
Curse of The Dead Gods hits consoles next month.
Ori and the Will of the Wisps (Switch) Review - The Perfect Port?