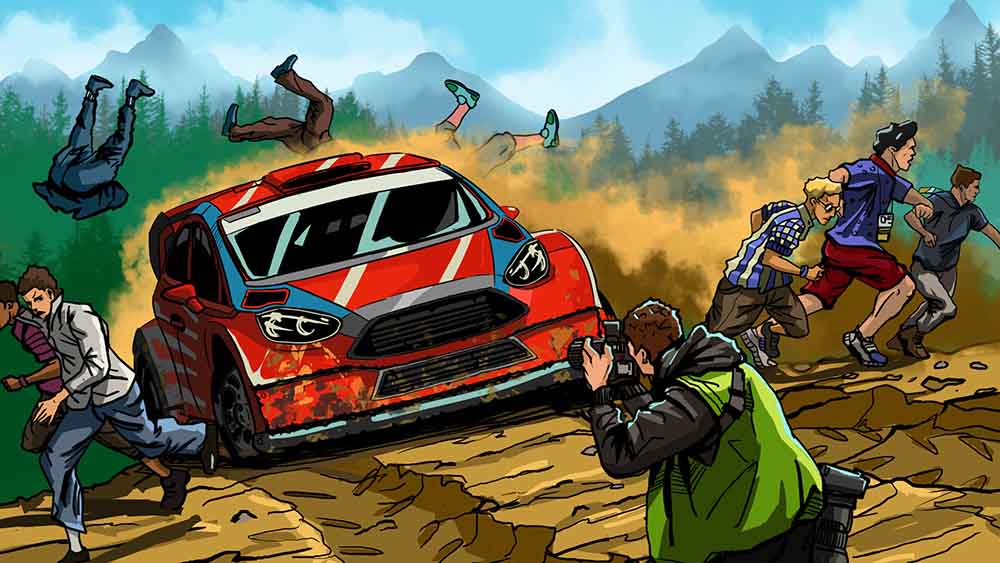 A basic enough racer, Bloody Rally Show doesn't boast anything ground-breaking. Yet, does it need to do so to be fun? The Finger Guns review:

What would you get if you took the driving concept of the first two Grand Theft Auto’s and mixed in the car combat carnage of Carmaggedon? Probably a very hefty prison sentence, I’d imagine. But if it were in video game form, you’d have the Bloody Rally Show.

It’s half past the future, society has delved into Idiocracy levels of mindless entertainment, one of which is racing cars decked out in sharp bits and weaponry around tracks. Tracks with loose concepts of barriers, and crowds that like to get involved. Or in the way.

Looking like something straight out of Newgrounds, Bloody Rally Show is simple and entertaining enough. Yet it has some very frustrating moments that would put Diddy Kong Racing to shame that hinders the full enjoyment experience. Let’s start those murder-machines and see what I mean…

And Some Say The NHS Is Bad

First and foremost, we’ll get the story out of the way. Gone are the days of just start-and-go gaming, there’s a contingent of players that need motive. Well, more of a motive than “drive fast, come first, run people over” anyway.

You, the unnamed protagonist (who the randomiser for me picked “Sincere Horton”) are cryogenically frozen in the modern day. Because, y’know, that’s something we so readily do now. Anyway, you’re thawed out some thirty years later, and are then presented with the bill. As it turns out, keeping someone on ice racks up a few dollars.

Nicholas Merryland, Bloody Rally Show director and general “bad guy in suit”, offers to pay your bill if you drive for him. Well, I say “offers”, more cajoles protagonist man into indentured servitude. As is the norm, you’re faced with veiled threats, sinister motive and all that jazz as you compete in violent death races.

It seems a bit pointless threatening someone with death when they could quite easily do that in a race, but I guess we needed a framing device.

But we’re not here to play death races for the story. We’re here to drive round bangers with garish paint jobs over finishes and into each other, preferably the latter out the way to be first to the former. Story be damned, how is the racing?

You’ll be pleased to know: it’s actually alright. It’s an arcade racer, so don’t expect levels of simulation on par with Forza or Gran Turismo. If players know what they’re doing, then of course they’ll know which corners to take wide, when to brake and whatnot. But in everyman’s terms, it’s a top down racer.

There are jumps, both beneficial and bastard-like when they’re right before a hairpin, and there are weapons. Standard fare, really, but it’s the tracks that are different. In the literal sense: they’re all procedurally generated, you see. Oh sure, players will see the same skins again, like playing Worms, but no two races will be the same. In that regard, it’s quite fun. Can’t memorise a track when it won’t come up again.

Round And Round We Go…

Outside of its randomised tracks, Bloody Rally Show doesn’t offer a lot more in terms of content. There’s nothing massively original to the weaponry, the boosting or even the on-track hazards. It’s about as generic as it gets. Occasionally the Director will drive round a course targeting people randomly, but that’s about it.

Career is your standard, points-led affair. Occasional challenges will pop up, offering players more points and/or cash upon completion, or a fine if not. There’s a time attack, as well as standard multiplayer, but they’re all par for the track in racing games.

The money that players earn can be spent on vehicle upgrades, or when a level requirement is met, a new car entirely. There’s not a massive variety to choose from, and as the level difference is vast between them, you’ll be spending a lot of time upgrading the one you’re currently in. Which, weirdly enough, I enjoyed. It felt nice to invest in a car for more than one race before it became redundant.

But if you’re looking for more than a simple, Newgrounds-looking, slightly-more-evolved-than-a-Flash-game, you’re going to be hard pressed.

…Until We Hit The Brakes

By the second season of chugging along, paying for level-based unlocks for my car, saving up enough for the next ride, I hit boredom. It’s not that Bloody Rally Show is a bad game, it just gets very repetitive, very quickly. That could be said of any racer, granted, but usually there’s some kind of bigger goal to aim for. Gran Turismo has players seek better licenses and better cars, Forza Horizon has its racers become the biggest social influencer, or something.

Bloody Rally Show doesn’t really offer much other than, “Keep at the seasons, pay your debt and then… keep racing”. Which, as I’ve said, is fine if you enjoy randomly generated levels with a different degree of racer difficulty over and over again.

But other than that, there isn’t really a lot to offer here. I was initially hooked with the early Grand Theft Auto style (both graphically and presentation), but as time went on, that novelty wore off. The same royalty-free sounding menu tracks, the lacklustre plot… it didn’t have me gripped.

However, here’s the caveat: whilst the campaign mode is a bit on the bland side, there is some more fun to be had. For one, car customisation is surprisingly vast, considering how basic it looks. It’s known that I’m not particularly creative, yet I can respect a decent attempt at personalisation in a game.

The other, and much bigger, element is the track editor. Oh yes, Bloody Rally Show has one, and again it is vast. I managed a very, very basic one, so don’t except some kind of racing jargon about how I built a speedway or whatever. Again, if players have the flair for it, there’s fun to be had here. Basic graphics be damned when you’re creating your juggernaut of a sprint track.

This is where Bloody Rally Shines, being able to build custom tracks to challenge your friends on. That smugness of besting a track in your Asian-sounding car with the neo-traditional skull on the bonnet. If multiplayer and leaderboards are your thing, then this game has you covered.

Skidmarks And Bloodstains Are All That’s Left

And that, in very basic terms, is Bloody Rally Show. The long and short of it is essentially: it’s a kart racer. Oh sure, you’re in cars, not karts, but the concept is still the same. The racing is pure arcade shenanigans, sliding round corners and through crowds as you either take pole position or your opponents out.

It has gratifying moments, like above, but these are always tinged with some bastard-hard randomised races and courses. It’s a knife’s edge of having fun teetering against, “Well that was bullshit, and I have to pay to restart the race” moments.

The verdict, then, is a tentative yes-but-if. I would say yes to it, if you want something simple. Yes, it is worth putting the time into it, if it’s only a couple of quid. It is indeed a fun game, if you want to put the time and creative flair into it. The art style is fun, if you like it simple and reminding you of Flash games from days past. If not, however, there are better kart racers out there, or at a push, Grand Theft Auto.

It’s fun on a basic level, but Bloody Rally Show doesn’t offer much depth after a fashion. The story holding it together is flimsy, as is the wonkiness with randomly generated tracks. However, for those that little simple visuals and lots of customisation, this cheap little racer will suffice.

Bloody Rally Show is available now on PlayStation 4 (reviewed on), Xbox One, Nintendo Switch and PC.