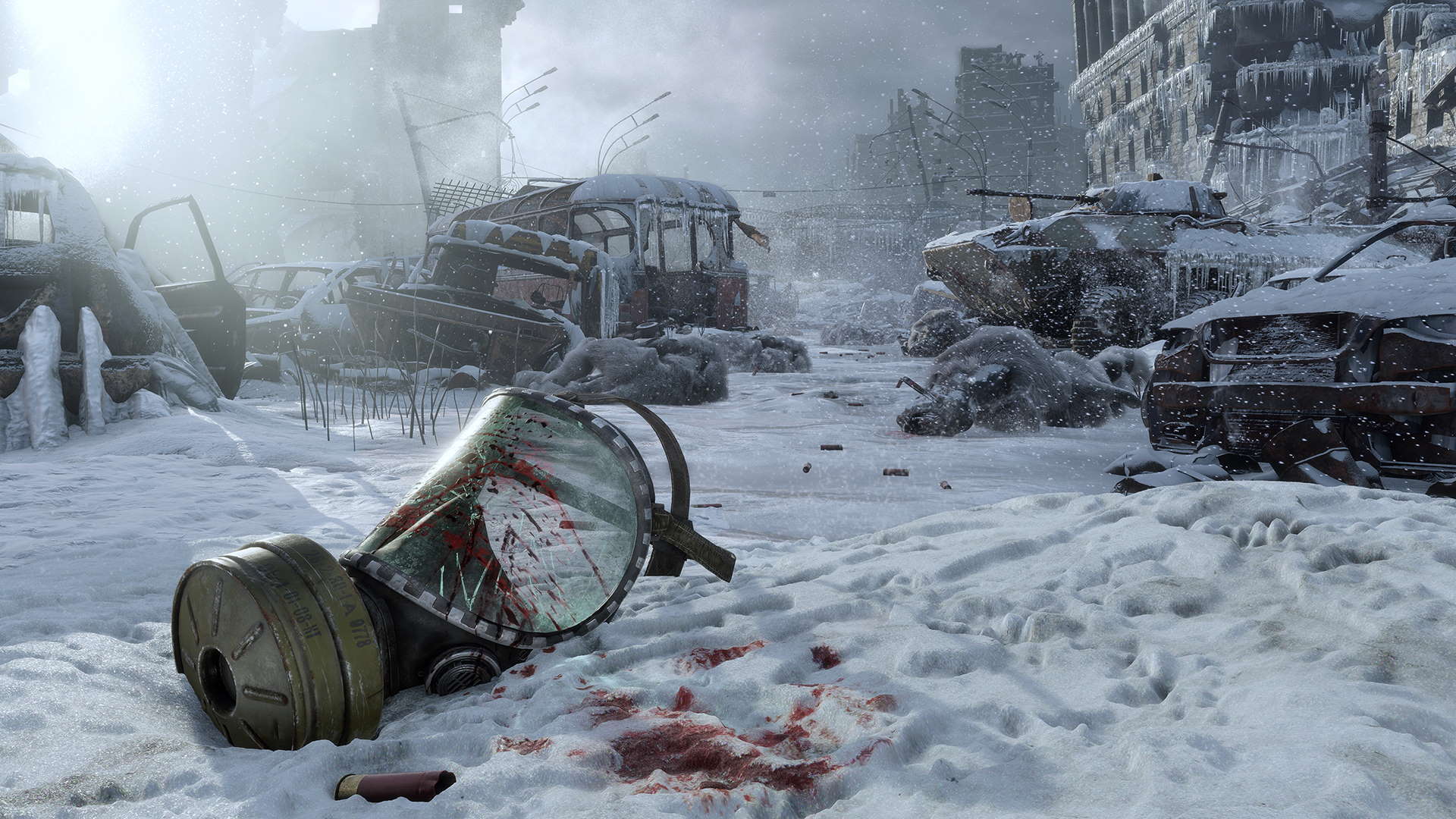 Considering how recent this game is, it's surprising to see Metro Exodus get an upgrade so soon. It may be free to last generation owners, but is it enough to draw in newcomers? The Finger Guns review:

Considering my propensity to buy a game when it’s remastered, I’m always wary when a new version comes around soon after its initial release. Final Fantasy VII Remake, for example, didn’t need one so soon just to shill some DLC with the always-irritating Yuffie. So when it was announced that Metro Exodus, which only came out in 2019 and already looked impressive, was getting one, the eyebrow was raised.

I’m not against PS5 or Xbox Series remasters. I own a PS5, so I want the shiny things. My objection is having to pay for them a second time, or in Miles Morales’ case, paying £50 for what it essentially an expansion pack. Metro already scores a brownie point by being a free upgrade, so we’re off to a good start.

Now, I’ve already reviewed Metro Exodus. It was on a base Xbox One console, so I didn’t benefit from 4K or ray tracing and such. But I already covered the plot, the mechanics and the pros and cons there. So don’t expect another expedition into those things. What this review will be, in brief, is a look at the enhancements this update has brought and whether it’s worth it. Let’s… train pun into the review.

As I briefly mentioned in the introduction, Metro Exodus already looked good when it came out in early 2019. Despite running it on my base Xbox One, which has no 4K capabilities nor the TV to show it off on, I was impressed. The varying seasons, weapon degradation and customisation, the desolate Russian landscapes… It all looked great “as standard”. A friend playing on an Xbox One X said it was, and I quote, “The mutt’s” when chatting about it.

So, what can be done to something that already looks good? Now, bear in mind that 4A aren’t a AAA studio, so they won’t have that Naughty Dog/Insomniac budget to play with. Temper those expectations lower than what you’d expect a Sony exclusive to put out and you’ll be pleasantly surprised.

As is becoming the norm with these “next gen upgrades”, Metro Exodus now supports full 4K at 60 frames per second, which is nice. Normally it’s a trade off for one or the other, not both. Secondly, there’s ray tracing. If you’re not overly familiar with that, don’t worry. It’s not necessarily ground-breaking, but it’s nice to see put it action. Now, you know me and technical jargon, we don’t get on.

But in layman’s terms, it creates more realistic environments. Light beams at play, puddle reflections, things normally taken as secondary brought to life. Again, it’s a generalisation from me as I can’t explain it without copy/pasting from a source. Basically, if you ever see ray tracing (or its abbreviation, RTX) being supported, that’s a very good thing. See Control for a cracking use of it.

Now, if you were to be upgrading to the Xbox Series version, you could probably just stop reading now. This next part is where the PS5 shines, and it’s the root of my love/hate with the console. I refer, once more, to the adaptic triggers of the DualSense controller.

To clarify: I love what Sony are trying to do. I get that they’re trying to raise immersion and innovation, totally fine with that. What I hate is how tacky and repetitive it can be at times. Sometimes I just want to chill with a game. There are times when I don’t want an atrophied finger because of the tension in Miles Morales’ web-swinging. Conversely, I love how well it’s implemented in Astro’s Playroom.

Here, and you may be surprised to learn, I actually really like the haptic integration. The standard usage is “You feel Artyom’s recoil in the trigger when you fire”. Don’t expect much there, that’s just going to be the norm for games going forward. But when you get the Tikhar; a pneumatic, pump-action rifle, you feel the resistance as the pressure builds.

When guns jam, or get harder to reload as degradation kicks in, players will feel that same desperation that Artyom does. Literally fighting against the resistance of the controller in the midst of a firefight is insane, and very well put to use. I won’t be cliché and say it’s lifelike, but it’s damn impressive all the same.

Getting On At The Right Stop

The hardest part of reviewing something again, much like I did with the Tony Hawk’s remasters, is convincing you to play something that’s already out there. If you’ve already played and finished Metro Exodus, are you really going to reinstall it for a few cosmetic upgrades?

Short answer: personal preference, I suppose. This question isn’t really for you. It’s more those that have never taken that step on board the Metro band… train. Admittedly, if you haven’t played 2033 or Last Light then, yes, it will be a hard sell to jump onto the third installment of a franchise. If you do want an incentive, both of those two are now available as a perked up Redux double pack.

So in that regard, is Metro Exodus worth jumping into blind on a next gen system? Another short answer: yes. To elaborate, it comes as a Complete Edition, paired with two story DLC packs. Both Sam’s Story and the Two Colonels haven’t quite received the full mark-up the main game has, but are still pretty to look at nonetheless.

Aside from the few niggles I found in the original review, there isn’t really anything new to complain about here. Being only two years old, it hasn’t really suffered any “tropes from the past” that say, a ten year old remaster would. The only real niggle, surprisingly enough, comes from the DualSense.

If, like me but more curmudgeonly, you don’t like the haptic feedback, you might want to turn it off. Yet weirdly, the only option in the menu is for the general vibration. If you want to turn off the haptic, you have to fanny about with the console’s controller settings. It’s a right faff, should players not fancy it.

The other drawback is the lack of visual customisation options. Whilst 4K, RTX and 60fps is absolutely great, if you don’t fancy playing with those… tough. There are no sliders outside of changing the gamma, so it’s more down to the brightness settings and that’s it.

Again, these are cosmetic and immersion niggles. They’re not deal-breakers, nor will trying to have a play around with the settings ruin the experience. It’s just a shame that with all the new bits and pieces that it’s a minor oversight on porting something over.

If you thought this review was shorter than my usual diatribes, then you’re right. As I say, if you want to know more about the story, mechanics, customisation et all you can find it here. Seems a bit of a waste of your and my time to repeat it all here. No, this was focusing on the upgrades.

Whether you’re jumping back in or going in fresh, either from the sequels or completely new, it’s worth it. There is more than enough to do in the base game, sidequests and all, to keep you occupied. Couple that with the DLC that comes with the Complete Edition, it turns Metro Exodus into a surprisingly lengthy game for a first person shooter.

The visual upgrades take full advantage of the new hardware, even if it’s not a “full AAA game”. The funky tweaks to the DualSense make it more immersive, if you’re in to that kind of thing. If you’re like me, you’ll appreciate what they’re trying to do, even if it’s not your bag. Like I say though, you can fiddle around and turn the gimmicks off.

I loved this the first time around, so jumping back in and taking advantage of my not-quite-redundant-now-I-have-games-for-it PS5 was ideal. In the short term, I’ve got further than I did the first time around. Now that I have the shiny version, and the DLC, I have no excuse not to put the upgrades to use and conclude this awesome trilogy.

Despite looking pretty impressive the first time round, the visual upgrades alone to Metro Exodus make it a worth entry in the PS5’s catalogue. It might help to play the others first, but when this is the conclusion, it looks and plays too good not to. Just work on those trigger-pulling muscles for the haptic feedback.

Get Back In Your Cel – 9 Games Breathing New Life Into Cel-Shading
Blood Nova Review (PC) - In The Name Of Love
New El Shaddai: Ascension of the Metatron PC Screenshots Unveiled

1 thought on “Metro Exodus Enhanced Review (PS5) – Back On Board”