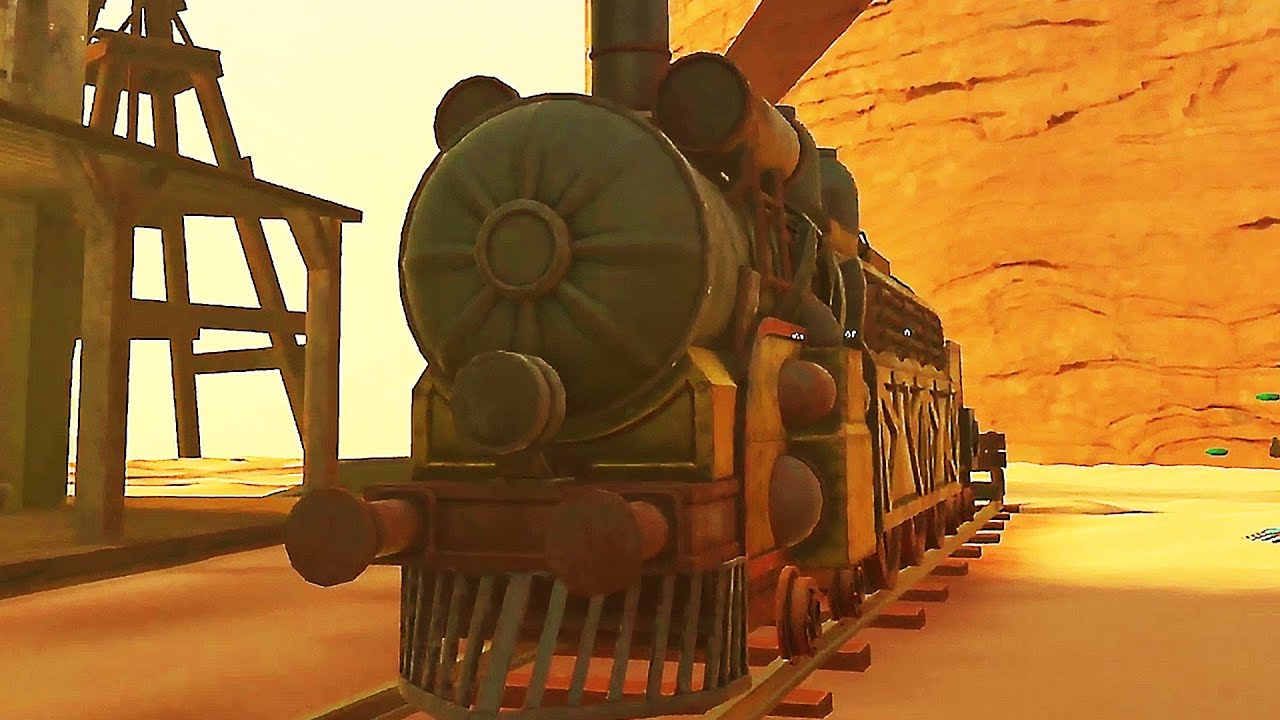 My kids have been begging me to let them play Cave Digger since they saw someone play it on YouTube. The problem is that the game was originally released as a VR game. Despite the game having a 3+ PEGI rating, I’ve seen enough warnings about not letting children under 13 use a VR headset to think twice about caving to their unending requests. Thankfully, Cave Digger is now available as a non-VR version which made my kids very happy – until they discovered that this version isn’t quite as good as the VR one.

Cave Digger is a first person mining simulator set in an alternate wild west setting with some very subtle steampunk elements. There’s a loose story here; a recession is looming over the nation and in order to avoid it, the country has called for miners to dig for precious minerals. It’s the players job to head down a shaft and dig for gold, gems and treasures. While that might sound drole, that framing is pushed to the background very quickly and replaced with a lighthearted experience.

The core loop to Cave Digger is to either explore the above ground area or descend into a mine shaft via a lift and use the tools at your disposal to pick away at the very obvious destructible rock. Those rocks contain precious materials which have to be picked up and put into a bucket. Each “run” at the mine shaft life gives you a set amount of time at 3 different floors before you return to the surface. Anything you manage to pick up and drop into the bucket then gets converted to cash and added to your bank account. Using that cash, you get to purchase or upgrade your equipment which will make it easier to mine the valuables. Rinse. Repeat. Because of the near constant reward, progress and discoveries, at least for the first 5-6 hours, the game is quite fun.

You begin the game with a pickaxe which you swing with a press on R2 which will chip away at rocks. This can be upgraded to a powered pickaxe which makes mining much faster. At the start of the game, it’s a bit of a crap shoot whether each rock you crack will bear any treasure. With a little bit of an investment though, you can buy a scanner which you can hold up to pinpoint where the valuables are. This means that each run into the mineshaft can be far more lucrative. Some of those treasures are fragile and need to be cut from the rock. Here you can use a circular saw (again, purchasable from the shop) to remove them. Of course, if you just want to blow the walls away and pick up the pieces, there are options for that too. Sticks of dynamite can be placed and will remove massive amounts of the rock walls but the blast will destroy the more fragile collectables. Then there’s the Chaos Gauntlet, a riff on Thanos’ favourite hand wear, that can punch walls to pieces but again, destroys the delicate loot. You can also collect oil from certain rocks with a drill. Pop a hole in the stone and oil will start to flow out which you need to catch in a bucket. Each floor the mine lift stops on will present something a little different. Some will have 4 solid walls of rock for you to pick at. Others will have items to interact with which hint towards a larger story arc.

When Cave Digger originally launched on PSVR, the only content in the game was the mine shaft. It was dry and repetitive but since then the game has really expanded via DLC. All of that content is included in the Non-VR version of Cave Digger – and it’s a good job too. A lot of that content is the best of what Cave Digger has to offer. Exploring a Wild West Town, completing timed objectives like “Mine X Silver Ore”, driving the train down the tracks to remote mining spots and beyond, meeting a Mimic chest with wings that follows you around and hoovers up any treasure that hits the floor and a whole host of light hearted and mildly humorous endings. Collecting all of the Chaos stones and putting them in the Chaos Gauntlet – Marvel Avengers style but if all the Infinity Stones were all buried in ground – leads to some… interesting places. Playing around with a nuke is both fun and the way to discover most of the endings in the game. Reaching any of these endings doesn’t actually end the game either; instead, it reloads the game with your bank balance and unlockables in place. The added content to Cave Digger brings a dark comedic feel to the whole game that’s probably the best aspect of the whole experience.

It’s such a shame the Cave Digger loses so much in its journey from VR to Non-VR. In the flat screen version of the game, you’re only ever able to use one hand at a time that simply floats statically in front of your viewpoint holding whatever tool you’ve chosen. This makes digging into some places – specifically the corners of the lift – quite difficult. You’ll swing with your pickaxe expecting to hit stone and hit nothing but air. When the time is ticking down and you’re trying to hoover up as much gold as possible, it can be a little frustrating. Only having one hand to use also means that you can only pick up one treasure at a time to put into the bucket (at least until you’ve unlocked the Chaos Gauntlet which attracts everything too it like a magnet). The default control scheme is a little clunky too. Holding down L3 to duck or X to run doesn’t balance out well when you’re holding R2 to do something or R1 to carry something while trying to turn with the right thumb stick. It feels like there’s too much going on over on the right side of the controller. Still, at least moving around the environment using a traditional first person view was more convenient than using teleportation and snap turning in VR.

It’s also surprising how poorly the visuals have translated onto a flat screen experience. In VR, Cave Digger looks quite detailed but the art style looks very basic when you’re not completely immersed in it. Parts of the game, especially the darkest areas in the game, are really difficult to navigate because of this.

Cave Digger becomes a real drag in the late game too. Some of the more interesting upgrades and repairs you can purchase cost tens of thousands of dollars and this can lead to a hell of a grind if you’re not smart with your spending.

Before that grind kicks in and despite its flaws, Cave Digger has a short lived but genuinely fun game play as you discover a weird west world and hit it with a pickaxe. There are a few chuckles to be had when you uncover some of the endings and this flat screen, non-VR version of the game finally made my kids happy for a few hours.

Cave Digger loses a lot of immersion in the journey to flat screen TV’s but the game play loop of mining and then re-investing in making the mining faster and more efficient still works a treat. Coupled with the darkly funny DLC which is included in the non-vr version of the game, this is a game that’s still worth a look when played on a TV rather than a headset.