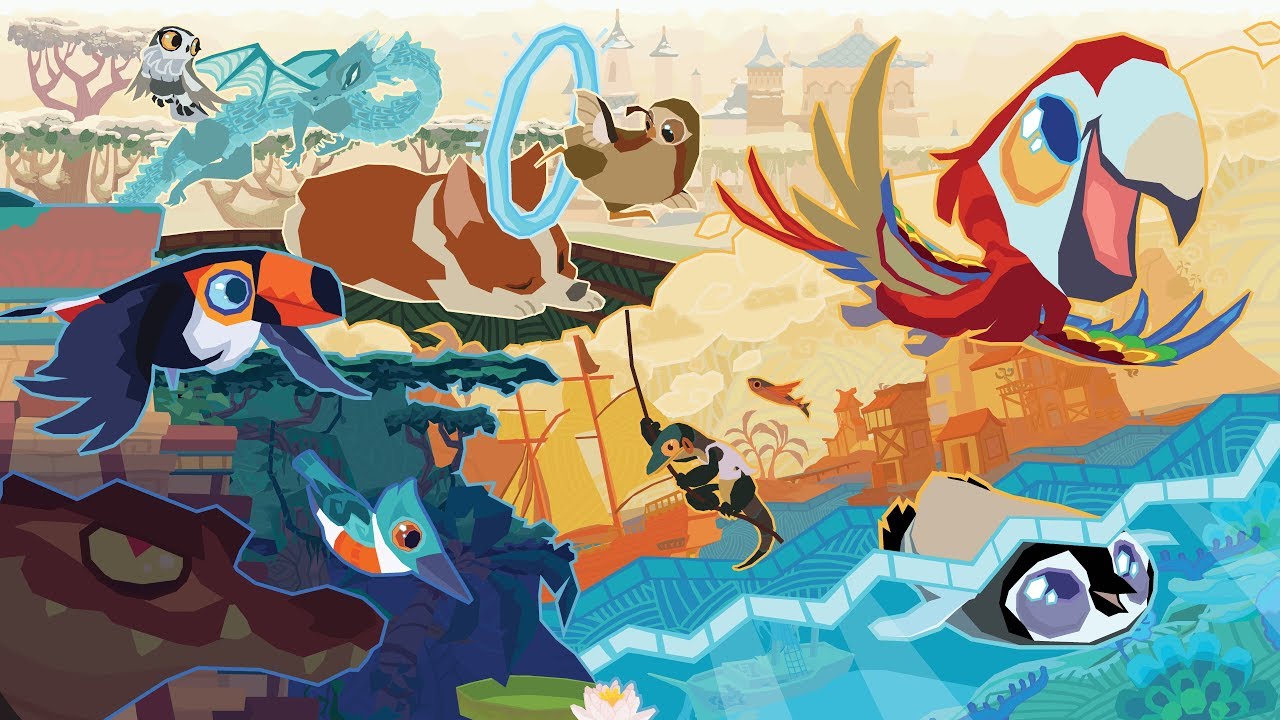 Fledgling Heroes is a flap' em up with a glorious colour palette and an inventive level editor, but does it offer more? The Finger Guns Review;

Remember Flappy Bird? Does the mere mention of the name send nostalgic(?) shivers down your spine with recollections of pure horror? The time you unceremoniously wasted in a vain attempt to achieve a score on that goddamn awful video game just to impress those whose opinions you never cared about anyway. You’re a ‘gamer’, surely you can do better than your friends uncle’s brother that you met once at a holiday gathering?

Flappy Bird was the hellhole mobile game of all hellhole mobile games and so, with this train of thought I was obviously the right choice to review Fledgling Heroes, a self-confessed ‘flap’-em-up’ with its DNA front and centre. Fortunately, this new take on the genre is leaps and bounds beyond his Flappyness, though that’s not saying an awful lot.

From the off you’re going to be taken by the charm on display. The games hand-drawn visuals are a delight on a big screen, with bright colours throughout and a storybook style that’s minimalist and effective. Each level offers an ever-so slightly altered take on its presentation, bringing to life your feathered friends and the dastardly goons that lay before them. Taking screenshots was a delight, with the animation smooth and stylish. From a technical standpoint Fledgling Heroes does the job and looks as crisp as anything you’ve seen on the Switch in handheld mode. The games cut-scenes deal exclusively in rhyming couplets which made me grin on a number of occasions.

Your task in each level is rather straightforward. Get your feathered friends from one side of the level to the other without getting hit by the various enemies and blockades in your way. Tapping A on your Joy-Con will keep your bird in the air and moving steady, with the now standard ‘tap faster to go higher’ mechanic which I imagine you’re more than familiar with at this point. Fortunately there’s additional options such as ‘boost’ and ‘glide’, both of which you’ll need to utilise in various segments in order to proceed. There’s not an awful lot of variety on display in terms of moving your character forward otherwise, though it’s more than enough to see you through. You can also gain momentum by bouncing off the head of your enemies and using it to propel yourself forward is a boon if there aren’t any Boost items around to push you into gear.

The variety appears when you’re able to switch your characters around. There are six birds you can unlock over the course of playing through the games story. Split into two camps, the ‘all-the-same-mechanics’ collection of the parrot, the owl and the toucan and the fancy bunch such as the penguin – that can swim underwater -, the kingfisher which can dive underwater and a quail which can run upon the ground. Underwater there’s a mix-up of enemy types and barriers but the core concept is exactly the same as in the air, you’d think the game was just flipped upside down.

You can tear through each level with different animals, and have a multitude of objectives to complete if you want to collect the maximum amount of golden feathers – used to unlock later levels and such – on offer. I found myself playing through each level a fair few times in order to make sure I collected everything, though there are certain moments where I would use language somewhat unsuitable for a family-friendly game review – seriously, it’s utterly abhorrent how frustrating it can be to knock out a flying flippin’ flish out of the sky if you’re a parrot. Naturally you can get yourself locked behind the rest of the game until you have enough feathers to pass through the maps doors, so you’ll have to git gud lest you’ll be playing the same levels on repeat until you throw your Switch out of the window and wonder if it can fly.

And once you have your feathers all stacked, the worlds and its inhabited levels unlocked and the big ol’ bosses defeated, the ‘story’ portion of the game just kind of, stops? There’s very little if anything to keep you coming back. The story is a charming if ultimately pointless link to each additional level and whilst the artwork is delightful, it’s let down by the shallow and meaningless narrative. I’m actually certain I would have scored this game higher if it simply wasn’t there at all. A few cut-scenes with the terrific art telling the story instead would have elevated my interest in the cut-scenes all the more. Instead, I found myself skipping through them to get back to the levels, as they offered very little to the overall experience.

Fortunately then, Fledgling Heroes saw it right to feature a Level Editor featuring items you can unlock throughout the campaign as part of the aforementioned objectives and it’s really rather good. Whilst there’s a certain plumber who might have something to say about a platform level maker that you can share with your friends on the Switch – and this is certainly no competition -, what’s here to play with is substantial and will keep the more creative corner of the audience busy long after the ‘story’ is done and dusted. Creating levels was as simple as ‘drag and drop’ and in around 25 minutes I had created a level and played through it several times. I’m not going to share it, because it’s terrible, but if I can figure it out there’s no reason why the younger audience won’t flock to it.

There were very few created levels available to play during my review period (naturally), but levels I did jump into was already rather clever and challenging. The game’s developer Subtle Room clearly want to enforce a community of creators with Fledgling Heroes, and more power to them. I may head back in a couple of weeks to see what the Switch audience hve been creating. Though I also might not.

Away from additional objectives, the new paths to find, there’s not much here that will keep your attention for longer than half an hour. The games origins is in mobile gaming (as part of Apple Arcade) and it shows. I dare say the Switch deserves a far more fleshed out take on the genre than another straightforward mobile port that sadly appears to be clogging up the eShop.

Come for the delightful artwork, stay for the level editor. You’ve seen everything else before.