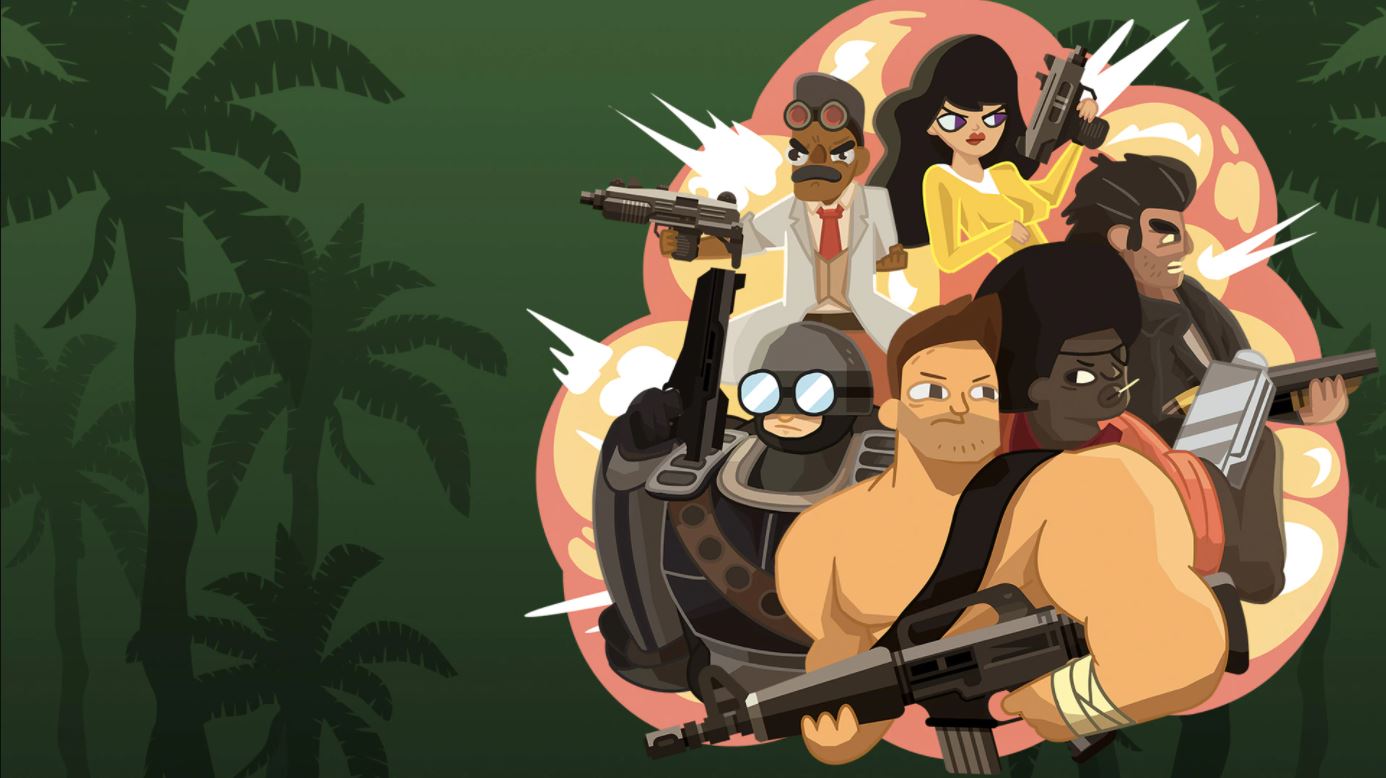 When Tango Fiesta is working as it should, it’s a joy to play. It’s such a shame that that feels like a rarity on this PS4 port. The game is an 80’s action-movie inspired top down twin-stick shooter with a clean art style and doesn’t take itself too seriously. It ticks *all* the right boxes for me – except for technical performance.

The premise of the game is incredibly simple – You (and up to 3 others if played in local co-op) are dropped onto a procedurally generated map and you must blast your way through waves of never-ending enemies to reach one or more objective(s). Once there, you destroy or activate the highlighted object. That’s it. The only other type of mission is a boss fight, of which there are 5.

The game is broken down into 2 different main modes – Arcade and Story.
In Story mode, you play through the adventures of John Strong (who looks as though he’s the love child of Arnold Schwarzenegger and Sylvester Stallone) who has been there, done that and shot it all to pieces. Each of John’s adventures are inspired by an 80’s movie – such as Running Man, Robocop and Ghostbusters – and a barrage of text before and after each level frames the violence along with unique features to each movie theme.
Tango Fiesta can go on a bit – it’s a little like that uncle that every family has who waffles on and on and on, struggling to get to the point – and the few giggles the game does provide are hardly worth reading through the walls of text it throws at you. Tango Fiesta also tries to mix cheesy dialogue you’d find in stereotypical 80’s action movies with dry British wit (e.g. one of the game villains is called Gordon Bennett after the popular expletive) and the combination doesn’t always land well. I found myself mashing the skip button more often than not.
Arcade more is the pure form of twin-stick shooter. 4 random levels filled with randomly selective enemies from any of the game’s themes are put together to form each Arcade mode run and the idea is to score as much as possible.

Tango Fiesta does have some balancing issues. There are a number of characters to select, each with their own perks and weaknesses based on total health, speed, stamina and accuracy. Each character can also equip 2 of 24 weapons (most of which are locked until you’ve played the game for a while) to take into battle. There’s one character – Bionic Cop (a riff on Robocop) – who has maximum health, stamina and accuracy but is a little slow. Equip him with the Manuel (a rapid fire pistol) and Tango Fiesta becomes comically easy.

That’s not the only issue either. The PS4 port of Tango Fiesta lacks that final polish and is filled with little bugs and glitches. Weapons don’t always point in the direction you’re shooting – You can be shooting to the left but your gun might be pointing up. You can’t shoot past the trunk of palm trees – it’s like the isometric element of these is broken. Enemies often have symbols above their head which represent items that they will drop when killed – only it seems this aspect is malfunctioning and fallen enemies don’t always drop that item or any item. Every helicopter in the game is on fire and smoking right from the start of every level.. Melee weapons work half the time. Some enemy troops don’t even move – they spawn and just stand there doing nothing until they’re killed as if someone turned off the AI. One boss fight become unfinishable when the boss jumped out of the playable area and wouldn’t jump back in – I had to restart the round which was irritating because the boss was on their last shreds of health. Twice while playing though the Story Mode, all enemies stopped spawning and my character’s movement slowed to a crawl. At various moments in the game, it felt like the soundtrack was un-synched with the rhythm like someone was playing a record over the top a different record with a different pace.
Tl;DR – The PS4 version has technical issues.

When the game is working as it should, the slick gunplay, simple premise, abrasive sense of humour and clean art style make it an enjoyable playlist co-op game for when you’re having some friends over for pizza and gaming. It’s a shame that the journey from PC to PS4 has been so rough and that Tango Fiesta is so filled bugs and glitches that I find this version hard to recommend to anyone. Do yourself a favour and go for a Tango Siesta instead (or get the game on PC).

Tango Fiesta is available now on PS4 (version reviewed), Xbox One and PC.

Disclaimer: We purchased a copy of Tango Fiesta in order to complete this review. For more information on how we review and score games, please see our review policy.